Food Security under Climate Risk: Conservation Farming and Upland Corn in the Philippines 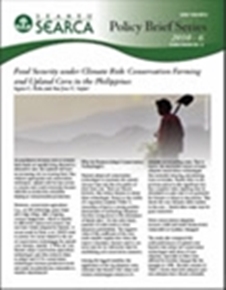 As population increases and as lowland farm lands are rapidly being diverted to alternative uses, the uplands will have an increasing role in securing food. But, without appropriate soil conservation techniques, upland soils become prone to erosion and could eventually become infertile as production intensifies leading to unsustainable production.

Farmers adopt soil conservation technologies to maintain the natural resource base and the soil quality of their farm area. There are factors, however, that induce farmers to adopt these technologies. On the other hand, quantity of seeds tends to lower adoption probabilities. The negative value of the coefficient of the corn seeds variable implies that when the input is abundant, farmers tend to use more area for its cultivation than for establishing soil conservation measures.