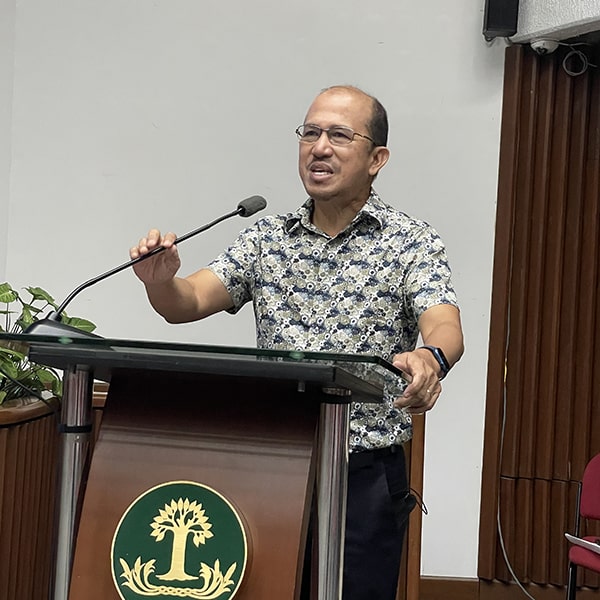 Dr. Glenn B. Gregorio, SEARCA Director, presents the Center's accomplishments.Dr. Gregorio will continue to serve in this capacity until 30 April 2025.

In a Townhall Meeting of SEARCA officials, staff, and scholars to kick off Dr. Gregorio's second term, Dr. Jose V. Camacho, Jr., University of the Philippines Los Baños (UPLB) Chancellor and Country Representative of the Philippines to and Chair of the SEARCA Governing Board, congratulated Dr. Gregorio on his reappointment and thanked him and SEARCA for always supporting UPLB in its bid towards internationalization.

"I would like to express my thanks to Dr. Gregorio for the many programs on faculty and student development that SEARCA offers to future-proof UPLB," said Dr. Camacho.

Dr. Gregorio is also Professor at UPLB, SEARCA's host institution since its establishment in 1966.

An eminent rice scientist and an Academician at the National Academy of Science and Technology (NAST) of the Philippines, Dr. Gregorio was endorsed by the SEARCA Governing Board and Philippine Department of Education (DepEd) Secretary Leonor Magtolis Briones for his second three-year term. His reappointment was approved and signed by His Excellency Chan Chun Sing, Singapore's Minister for Education and current SEAMEO Council (SEAMEC) President.

"From 2020 to 2025, SEARCA will strive to be a leading enabler and champion of excellence in agricultural and rural development in Southeast Asia to elevate the quality of life of agricultural families through sustainable livelihoods and access to modern networks and innovative markets," said Dr. Gregorio.

He then cited improvements and programs implemented during his first term as Center Director according to SEARCA's tagline of "Better," "Bigger," and "Smarter."

"Better" corresponded to the establishment of career path and compensation and health benefits as well as new units and departments, and an integrated Monitoring Evaluation and Learning (iMEAL) system, as well as publicity efforts. The SEARCA e-Library will also continue to provide online services during the pandemic.

As a strategic improvement in the landscape of the community and for the maintenance of the physical structure, the Center had a repainting of the facade and exterior walls of the headquarters.

SEARCA became better in strengthening community relations and engagement strategies through outreach activities of the SEARCAlinga program. This benefited over a thousand recipients ranging from our staff, scholars, frontliners, mothers, children, senior citizens as well as typhoon victims. COVID-19 booster and vaccination and distribution of health kits were also among the pandemic responses to support SEARCA staff and agency personnel.

"Bigger" manifested in the expansion of the Southeast Asian University Consortium for Graduate Education in Agriculture and Natural Resources (UC) and the implementation of the Philippine Commission on Higher Education (CHED)-funded Leveling-Up Philippine Higher Education Institutions in Agriculture, Fisheries, and Natural Resources (LevelUPHEI AFAR) project and the International Foundation for Science (IFS)-SEARCA Grants, the upscaling of the School-plus-Homes Gardens Project (S+HGP), and the Center's online and media presence, and publications.

In terms of partnerships, SEARCA got bigger. Over 50 formal agreements with local, regional, and international partners were forged with different institutions ranging from MOUs, MOAs, and LOAs on joint projects.

SEARCA also continues to provide Institutional Development Assistance (IDA) to empower agricultural universities in the region. More notable among these are the continuing initiatives with the Royal University of Agriculture (RUA) in Cambodia that include a joint scholarship to build its capacity for aquaculture and agricultural extension.

"Smarter" was seen in the establishment of the SEARCA Grants for Research towards Agricultural Innovative Solutions (GRAINS), partnership with East-West Seed, Inc. and others for the Innovation Olympics 2.0 for smarter agriculture, and the SEARCA Hub for Agriculture and Rural Innovation for the Next Generation (SHARING).

The SEARCA Online Learning and Virtual Engagement (SOLVE) webinar series was also launched to effectively reach out to SEARCA's stakeholders despite the ongoing pandemic. As of the Director's presentation, 41 SOLVE webinars have been conducted covering all the seven priority areas of ATTAIN.

True to the Center's priority area for youth engagement, the Young Forces for Agricultural Innovation (#Y4AGRI) was formalized as the banner youth program of SEARCA with platforms giving voice to the youth in ARD. Under this program, the SEARCA Youth Ambassadors Platform (SAYAP), an internal platform composed of young staff from all SEARCA Departments and Units, led the launching of Virtual Youth Camp, Pistang PagKaPinoy, and SEARCArunungan para sa SEARCAbataan webinars.

"With the complexity of the challenges in agriculture in our society, we need to work together in partnerships. Let us intensify acceleration more for our farmers and farming families in Southeast Asia and beyond," Dr. Gregorio concluded.

Dr. Gregorio along with his family, SEARCA officials, staff, and scholars pose for a photo opportunity to cap off the first onsite Town Hall meeting during the pandemic.

In the endorsement of Dr. Gregorio for a second term, he was recognized for his varied contributions to the institutionalization and growth of agricultural innovation in the region. He was appointed as one of the new United Nations (UN) Food Systems Champions. Moreover, Dr. Gregorio is President of the Society for the Advancement of Breeding Research in Asia and Oceania (SABRAO) until 2023 and the Chairperson of the Commission on Higher Education (CHED) Technical Panel for Agriculture until 2024. He served the International Rice Research Institute (IRRI) for almost 30 years, including a five-year stint as IRRI's rice breeder in Africa based at Africa Rice Centre station at the International Institute of Tropical Agriculture in Nigeria from 2004 to 2009.

Since his assumption of office on 1 May 2019, Dr. Gregorio has been transforming SEARCA into a healthy, inclusive, and sustainable setting for design thinking, learning, and working. He said that SEARCA at this stage of the 11th FYP is "stepping up and stepping out."

"This past year, we have been stepping up, by taking the challenge of becoming more relevant in this time of the pandemic, stretching our limit as frontliners in education and agriculture and making a difference. This year, we continue our mission while also stepping out – stepping out to expand, scale up, and go beyond our comfort zones towards a better, bigger, and smarter SEARCA," said Dr. Gregorio during the SEARCA Governing Board Meeting held last year.