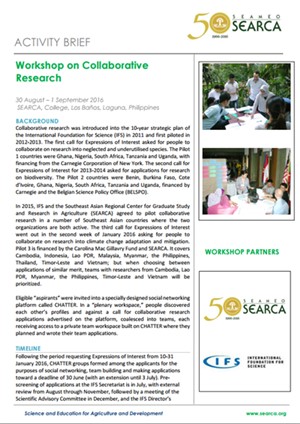 Collaborative research was introduced into the 10-year strategic plan of the International Foundation for Science (IFS) in 2011 and first piloted in 2012-2013. The first call for Expressions of Interest asked for people to collaborate on research into neglected and underutilised species. The Pilot 1 countries were Ghana, Nigeria, South Africa, Tanzania and Uganda, with financing from the Carnegie Corporation of New York. The second call for Expressions of Interest for 2013-2014 asked for applications for research on biodiversity. The Pilot 2 countries were Benin, Burkina Faso, Cote d'Ivoire, Ghana, Nigeria, South Africa, Tanzania and Uganda, financed by Carnegie and the Belgian Science Policy Office (BELSPO).

In 2015, IFS and the Southeast Asian Regional Center for Graduate Study and Research in Agriculture (SEARCA) agreed to pilot collaborative research in a number of Southeast Asian countries where the two organizations are both active. The third call for Expressions of Interest went out in the second week of January 2016 asking for people to collaborate on research into climate change adaptation and mitigation. Pilot 3 is financed by the Carolina Mac Gillavry Fund and SEARCA. It covers Cambodia, Indonesia, Lao PDR, Malaysia, Myanmar, the Philippines, Thailand, Timor-Leste and Vietnam; but when choosing between applications of similar merit, teams with researchers from Cambodia, Lao PDR, Myanmar, the Philippines, Timor-Leste and Vietnam will be prioritized.

Eligible "aspirants" were invited into a specially designed social networking platform called CHATTER. In a "plenary workspace," people discovered each other's profiles and against a call for collaborative research applications advertised on the platform, coalesced into teams, each receiving access to a private team workspace built on CHATTER where they planned and wrote their team applications.

Following the period requesting Expressions of Interest from 10-31 January 2016, CHATTER groups formed among the applicants for the purposes of social networking, team building and making applications toward a deadline of 30 June (with an extension until 3 July). Prescreening of applications at the IFS Secretariat is in July, with external review from August through November, followed by a meeting of the Scientific Advisory Committee in December, and the IFS Director's decision by 20 December 2016. The grant administration and research phase will begin in January to March 2017.

This IFS-SEARCA Workshop on Collaborative Research is by invitation for all applicants who pass pre-screening. The purpose of the workshop is to improve the quality and effectiveness of collaborative research on climate change adaptation and mitigation through building the capability of earlycareer scientists in collaborative research concepts, approaches, design, methods and analysis. The workshop's specific objectives are for participants to: