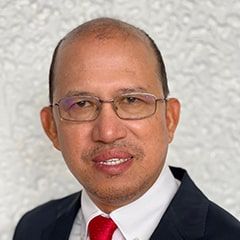 Dr. Glenn B. Gregorio is the 11th SEARCA Director, having assumed office as SEARCA Director on 1 May 2019. He obtained his Ph.D. in Genetics minor in Statistics, M.Sc. in Plant Breeding minor in Soil Science, and B.S. Agriculture at the University of the Philippines Los Baños (UPLB).

His career was developed at the International Rice Research Institute (IRRI) for twenty-nine years as a plant breeder researcher; during which he also served as Post-Doctoral Fellow and assumed various research positions like Post-Doctoral Fellow, Scientist, Senior Scientist, and Deputy Division Head of IRRI’s Plant Breeding Genetics and Biotechnology Division. At IRRI, he worked on Rice Breeding for tolerance to saline-prone and problem soils, and as Coordinator for varietal development pipeline-cross cutting R&D and spent four years as Rice breeder for sub-Saharan Africa based in the International Institute for Tropical Agriculture (IITA) station in Nigeria. He had a three-year stint as global crop breeding manager for corn at East-West Seed Company. He is also a professor at the Institute of Crop Science, College of Agriculture and Food Science at UPLB.

Dr. Gregorio was also conferred the rank of Academician as member of NAST-Philippines in 2018.