In response to the ongoing salinity and drought concerns in Vietnam's Mekong River Delta (MRD), the Southeast Asian Regional Center for Graduate Study and Research in Agriculture (SEARCA) has recently released a policy paper that analyzes the economic importance of the rice production sector, the extent of salinity and drought in MRD including how it can be exacerbated by climate change-related hazards, and specific policy interventions that must be in placed both at the national and farm levels.

In the paper, SEARCA has noted the importance of rice production in the MRD as the sector has been, and will remain to be, a major engine of economic growth and poverty reduction in Vietnam. For the past 10 years, the MRD region has shared ~50% of the total volume of rice production in Vietnam. Its importance of the MRD in the global rice trade is also undeniable as it has contributed ~90% of the total volume of rice export of Vietnam. 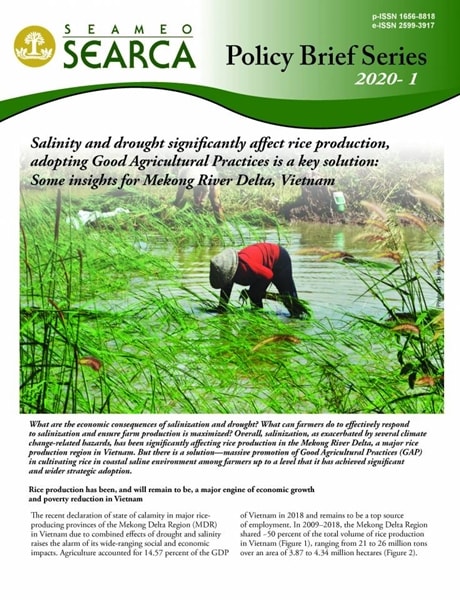 Click to download the publication for freePutting together results of various published materials, the SEARCA policy paper also noted how salinity and drought have significantly affected the area and volume of rice production in the MRD. Estimates have shown that 10 of the 13 provinces of the MRD have suffered severe drought and salinity intrusion due to the decrease in upstream flow as a result of El Niño. Due to combined effects of salinity and drought available data have shown that rice production in Vietnam decreased by 4.5% from 45.10 M tons (2015) to 43.17 M tons (2016), while the yield per hectare decreased by 3.2% from 5.76 tons/ha (2015) to 5.58 tons/ha (2016). The onset of climate change and its related hazards have been observed to further exacerbate such negative effects of salinity to rice production in the MRD that if it remains systematically unabated would result to food insecurity and reduction of the rice industry's competitiveness.

In response, SEARCA has called for an innovative system of integrated policy, services, technology, human capital development, and social community engagement to be supported and strengthened in Vietnam. While the paper has noted that the major elements of a competitive rice sector is already in Vietnam, further interventions related to rural infrastructure like irrigation system, effective transport and logistical systems, advisory services, weather and climate monitoring data systems, among others, were noted. SEARCA also highlighted the need for sustained promotion and support for Research and Development that must be geared towards the development and wider adoption of integrated rice farming technologies that ensure high productivity and resilience.

For more information, the paper can be downloaded for free in this link: https://bit.ly/searca-pbs-2020-1