You are here: Home   /   News & Updates   /   SEARCA News   /   SEARCA participates in the concluding activity of the IDRC project on climate change adaptation 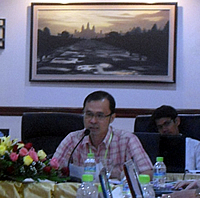 In his opening message, Dr. Ngin Chanrith, Director of the Department of Development Studies of RUPP, expressed his appreciation of the diversity of participants who attended the workshop, and lauded the country project teams for their effort to collaborate and work as together as a team, which he said is evident in the outputs of the project.

Dr. Herminia Francisco, Director of the Economy and Environment Program for Southeast Asia (EEPSEA) recalled the beginnings of the project and the rationale behind its design, which is multi-country, interdisciplinary, and participatory action research.

The LGU representatives of each country presented their roles in the project, their experiences, knowledge gained by participating in project activities, actions made based on their learnings, and suggestions for future interventions. Dr. Francisco led the team in the discussion of possible country and institutional collaborations and future projects related to climate change adaptation. The discussion focused on capitalizing the project’s research findings and identifying what else can be done by participating institutions or can be supported by EEPSEA/IDRC to expand the impact of the project and further disseminate its outputs.

The research teams then discussed areas for future collaboration and finalized project documents required by the IDRC and EEPSEA. (Pamela Joana Rocamora)