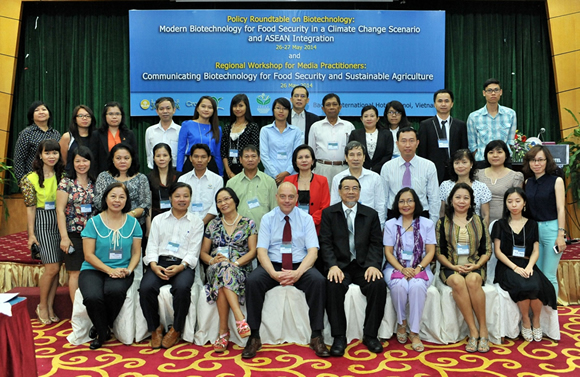 Two parallel learning events convened policymakers and media practitioners from Cambodia, Laos, Myanmar, Vietnam (CLMV), and the Philippines to discuss and get updated on crop biotechnology developments in the region on 26-27 May 2014 at Baoson International Hotel, Hanoi, Vietnam. Spearheaded by the Southeast Asian Regional Center for Graduate Studies and Research in Agriculture (SEARCA), the Eleventh Policy Roundtable on Building Capacities for Agricultural Competitiveness in Transition Southeast Asia focused on the theme “Modern Biotechnology for Food Security in a Climate Change Scenario and ASEAN Integration” while the Regional Workshop for Media Practitioners centered on “Communicating Biotechnology for Food Security and Sustainable Agriculture.”

The Policy Roundtable informed on the state and commitment of CLMV in the development and regulation of modern biotechnology products. It also discussed the impacts of biotechnology on agriculture, food security, and poverty in the region and explored possible areas for collaboration and cooperation in the development of biotechnology products as adaptation strategy for climate change. It was facilitated by the Chair of the Biotechnology Advisory Team of the Philippine Department of Agriculture Dr. Saturnina C. Halos, and participated in by representatives from the Royal University of Agriculture of Cambodia, the Ministry of Science and Technology of Lao PDR, the Food Security Working Group in Myanmar, and the Institute of Agricultural Genetics of Vietnam. Meanwhile, the Media Workshop served as a venue for the media practitioners in CLMV and the Philippines to share their experiences on how biotechnology is reported in their respective countries. It also imparted lessons for more accurate and science-based biotech reporting. The workshop was facilitated by the International Service for the Acquisition of Agri-biotech Applications (ISAAA) Senior Program Officer Dr. Rhodora R. Aldemita, and SEARCA Biotechnology Information Center (BIC) Special Project Coordinator Ms. Maria Monina Cecilia A. Villena; it was attended by print, TV, and online journalists from the said countries.

In his opening remarks delivered by the Program Head of SEARCA’s Knowledge Management Department Dr. Maria Celeste H. Cadiz, SEARCA Director Dr. Gil C. Saguiguit, Jr. said that modern biotechnology brings hope to the challenge of feeding a growing population amidst widespread poverty and a changing climate scenario. He also cited the importance of unbiased, evidence-based reporting through the media that would stir the interest of key stakeholders especially the policymakers to look deeper into the technology’s nuances and potentials in achieving food security in the region.

Meanwhile, Senior Researcher at the Indonesian Center for Agricultural Biotechnology and Genetic Resources Research and Development (ICABIOGRAD) Dr. Muhammad Herman explained in his presentation the need for modern biotech. According to Dr. Herman, with the unfavorable effects of climate change in agriculture, modern biotechnology is a highly beneficial tool that would help tackle problems that cannot be addressed by conventional plant breeding such as acquiring some specific desired crop traits (i.e., resistance to pests or diseases) that are necessary in adapting to the changing climate.

These back-to-back activities were co-organized by SEARCA with ISAAA, CropLife Asia, AGBiotech Vietnam, and the Agricultural Genetics Institute (AGI) of Vietnam Academy of Agricultural Sciences.

For more information on biotechnology developments in the Philippines or in the Southeast Asian region, visit SEARCA BIC’s website at www.bic.searca.org or send an e-mail to .