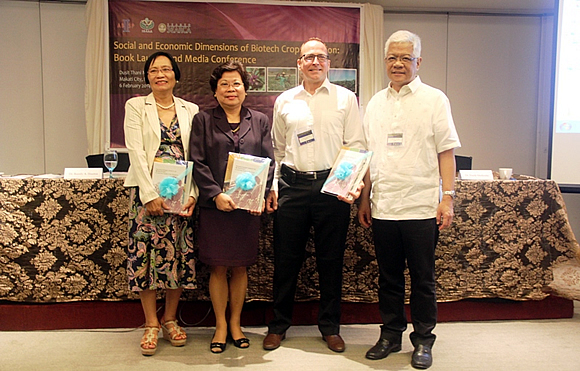 MANILA, Philippines -- SEARCA, in collaboration with the International Service for the Acquisition of Agri-biotech Applications (ISAAA), introduced new publications about biotech crops in the Philippines during the Social and Economic Dimensions of Biotech Crop Adoption: Book Launch and Media Conference held on 6 February 2014 at Dusit Thani Hotel, Makati City.

The monograph Adoption and Uptake Pathways of GM/Biotech Crops by Small-scale, Resource-Poor Filipino Farmers co-published with the UPLB-College of Development Communication (UPLB-CDC) and authored by Dr. Cleofe S. Torres, Mr. Romel A. Daya, Ms. Ma. Teresita B. Osalla, and Ms. Juvy N. Gopela, all of UPLB-CDC, showed the dynamics of the adoption and uptake pathways of biotech corn among small-scale, resource poor farmers and the changes it has brought in the farmers’ lives. The publication is also “a tribute to the small-scale and resource poor biotech corn farmers who have allowed us to capture their narratives on how adoption of biotechnology can be a life changing experience,” according to the foreword by SEARCA Director Dr. Gil C. Saguiguit, Jr., ISAAA Global Coordinator Dr. Randy A. Hautea, and Dr. Torres.

Meanwhile, the Socioeconomic Impacts of Bt Eggplant: Ex-ante Case Studies in the Philippines features studies on the market prospects and potential economic, health, and environmental impacts of the insect resistant Bt eggplant in the Philippines. In his foreword, Philippine Department of Agriculture Undersecretary for Policy, Planning, Program Development, R&D and Regulations Segfredo R. Serrano wrote that the book “is a good information resource for policy-makers and technology adopters to guide investments in the technology, and other stakeholders to know more about Bt eggplant in order to help them make informed decisions.”

Bt eggplant, which is being developed in the Philippines by UPLB-Institute of Plant Breeding, is resistant to the fruit and shoot borer (FSB), a major insect pest in eggplant farming. If left uncontrolled, FSB can cause up to 80 percent yield loss in conventional eggplant. Pesticides meanwhile take up 30 percent of total production costs, making it the most expensive among all inputs.

Also launched during the event was the monograph Cadres of Change: Transforming Biotech Farmers in China, India, and the Philippines which captured how biotech crops positively changed the lives of small farmers in the three countries and shows the highlights the findings of the research project “Adoption and Uptake Pathways of Biotech Crops by Small-scale Resource-poor Asian Farmers: Comparative Studies in China, India, and the Philippines” funded by the John Templeton Foundation and led by Dr. Mariechel Navarro, Director of the Global Knowledge Center on Crop Biotechnology of ISAAA, and Dr. Randy Hautea. According to Dr. Hautea, the research project focused on the three countries because 85 percent of all biotech crop farmers in the world cultivate there. The monograph was published by ISAAA, the Center for Chinese Agricultural Policy, Chinese Academy of Sciences (CCAP, CAS), the Indian Society for Cotton Improvement (ISCI), and UPLB-CDC. 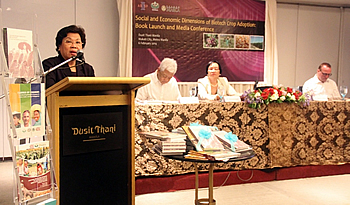 In his welcome remarks delivered by SEARCA Deputy Director for Administration Dr. Virginia R. Cardenas, Dr. Saguiguit reiterated that the Center considers biotechnology as an important innovation for increasing food production and addressing other concerns in realizing food security. He said that hopefully, the lessons and research results captured in the books would serve as useful tools to help stakeholders make informed decisions about biotechnology, and hopefully encourage adoption of more biotech crops in the Philippines. He also stated that the country should be more open to similar promising biotech products such as the insect resistant Bt eggplant with already more than a decade of successful and beneficial biotech corn adoption.

Dr. Hautea, meanwhile, said that the publications focus on the more important questions about the technology which is that on welfare benefits to farmers and the society. He also explained that the Socioeconomic Impacts book is part of the responsibility of UPLB and the Agricultural Biotechnology Support Project II (ABSP II), a collaborator to the Bt eggplant project, to help define the focus of the research in terms of its potential impact, while the Adoption monograph validated how biotech corn improved the lives of small-scale farmers, their families, and their communities.

For more information about the publications or biotechnology in the Philippines, visit SEARCA Biotechnology Information Center’s website or send an e-mail to .