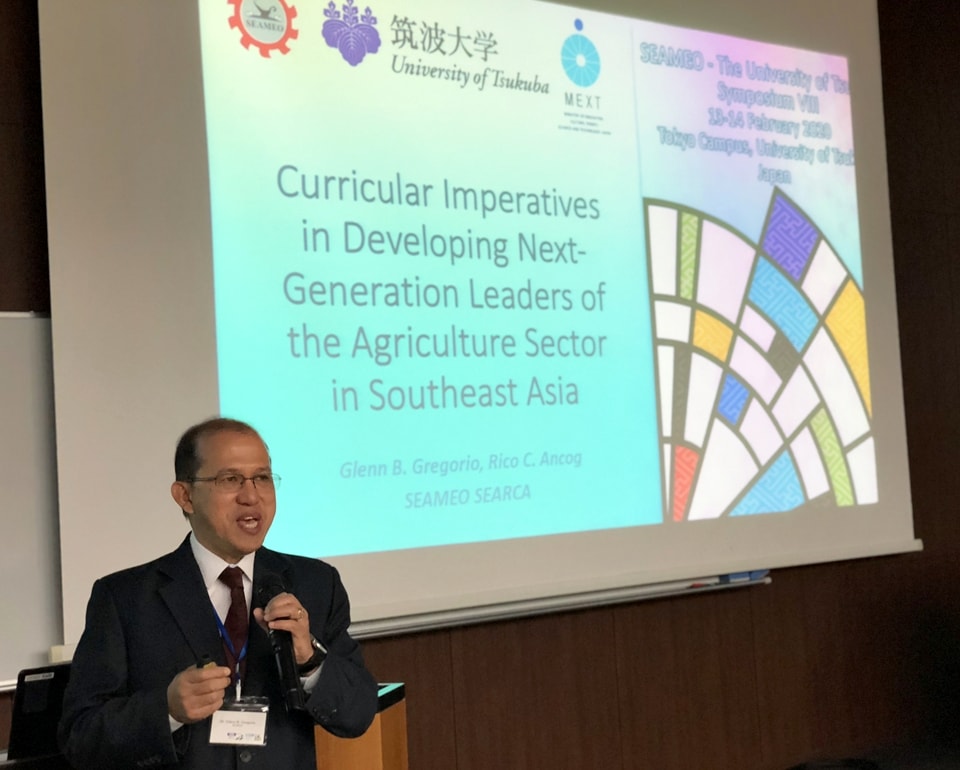 TOKYO, Japan – As a technology-dependent workflow increasingly becomes the norm, some challenges posed by the Industrial Revolution 4.0 that educational institutions must address were tackled by Dr. Glenn B. Gregorio, Director of the Southeast Asian Regional Center for Graduate Study and Research in Agriculture (SEARCA), at the SEAMEO-University of Tsukuba Symposium VIII held on 13-14 February 2020.

Jointly organized by the Southeast Asian Ministers of Education Organization (SEAMEO) and University of Tsukuba at its Tokyo campus, the symposium was themed "Education for Inclusive Growth of Society 5.0."

SEARCA is one of the oldest regional centers of SEAMEO, which was founded in 1965 to promote cooperation in education, science, and culture among Southeast Asian nations. The University of Tsukuba has been an affiliate member of SEAMEO since 2009.

In his talk on curricular imperatives in developing next-generation leaders of the agriculture sector in Southeast Asia on 14 February, Dr. Gregorio noted that the challenges posed by IR 4.0 include "preference for technology over human labor, security issues, reliability and stability of technologies, and the reluctance of people to change."

He said these challenges are largely ethical concerns that need to be addressed at the school level.

"Character education therefore becomes even more important as we usher in the era of the Fourth Industrial Revolution characterized by changes, innovations, and disruptions in the society due to the fast-paced innovation and technology development. While these innovations and disruptions would mean increased productivity and efficiency, it could in another way negatively affect social identities, values, and established ethics," Dr. Gregorio explained.

"We need innovators with big hearts to be the heart of the Fourth Industrial Revolution," he stressed that the best resource would be neither capital or labor but those people who can create new ideas and innovation.

"SEARCA's vision for the agriculture sector, for instance, is towards the application of modern farm technologies and practices that will increase productivity and efficiency." Dr. Gregorio said.

He said the pillars of modern agriculture are "organizing and managing agriculture as a business, changing the social structure through asset reform, and nurturing values respecting nature and community."

Dr. Gregorio said there is a need to transform small farmers into entrepreneurs and overcome problems of scale by concentrating in key production areas through industry-wide clustering and strengthening of cooperatives and farmers organizations.

Moreover, he explained that altering the social structure can be done by strengthening the role of agriculture for poverty reduction, empowering farmers and fishers, transferring property or usufruct rights to assets to farmers and fishers, and stimulating investments among owners and rights holders to make assets productive. 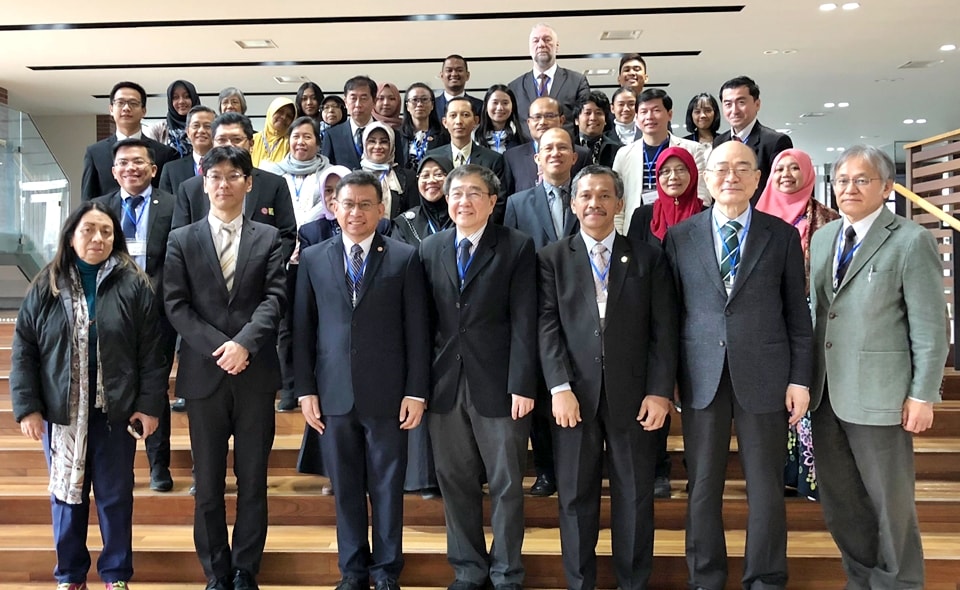 Dr. Gregorio also shared the values needed in character formation for the next-generation Agriculture 4.0 identified by the Center for Curriculum Redesign as follows: mindfulness, curiosity, resilience, fortitude, ethics, and leadership.

If capital, labor, and research & technology are the brain and brawn, innovator-leaders with those key values will serve as the necessary heart of the Agriculture 4.0.

He emphasized that character education should be delivered in a fresh, creative, and communicative context-specific approach rather than the usual teacher monologues.

He added that parents and community involvement in the character education can also be an important dimension that needs to be explored.

Dr. Gregorio shared SEARCA's initiative to establish school-plus-home gardens as a learning facility for students to understand the basics of farming through experiential learning activities while instilling in them the value of agriculture. Moreover, as recommended by SEARCA, teachers are beginning to integrate concepts of organic agriculture, nutrition, and climate change in the lesson plans in English, Science, Mathematics, and Technology and Livelihood Education of Grades 4 and 7.

"The emphasis on the plus in the S+HGP went beyond merely building gardens in children's homes but resulted in having parents conscientiously getting more involved in the nutrition of their children," Dr. Gregorio said.