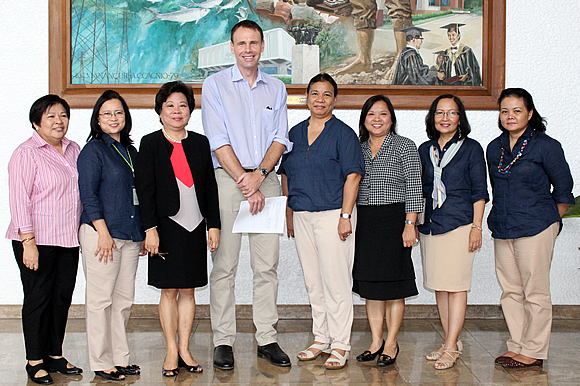 Mr. David Dutton, Minister and Deputy Head of Mission of the Embassy of Australia to the Philippines, visited SEARCA on 25 June 2014 to know more about SEARCA’s programs and activities, especially those supported by the Australian Government. He was accompanied by Ms. Cecilia O. Honrado, Philippine Manager of the Australian Centre for International Agricultural Research (ACIAR).

Mr. Dutton was also apprised of SEARCA’s past collaborations with various Australian institutions, including several research projects with ACIAR, the latest of which is the completed Transport Policy Study: Promoting Efficiency and Productivity of Flow of Goods – A Focus on the Transportation Needs of Mindanao. Currently, SEARCA is implementing an Overseas Study Mission of Livestock R&D Institutions which has Australia as one of the four countries to be visited in benchmarking the Philippine Carabao Center with similarly situated institutions in other countries. 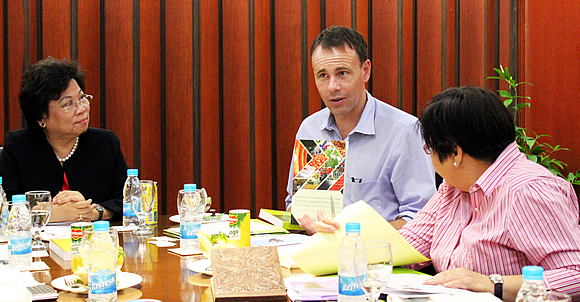 For his part, Mr. Dutton explained that the Australian Government’s new aid policy focuses more on supporting countries in the Asia-Pacific, with emphasis on economic growth to raise living standards and improve people’s lives. He said Australia would develop new initiatives to support economic growth in the Philippines including in the areas of economic policy and infrastructure. Noting SEARCA’s regional focus, Mr. Dutton said the Center may also be able to tie up with Australia’s regional programs. He also shared that 2014 is the 40th anniversary of the ASEAN-Australia Dialogue Relationship, and as such is an important year for Australia to support initiatives in ASEAN.

There was a discussion of prospects on how SEARCA may tap from Australia’s expertise and resources, including learning events and pilots toward tying in the link among practice, science, and policy in “Inclusive and Sustainable Agricultural and Rural Development (ISARD),” the overarching theme of SEARCA’s Tenth Five-Year Plan.