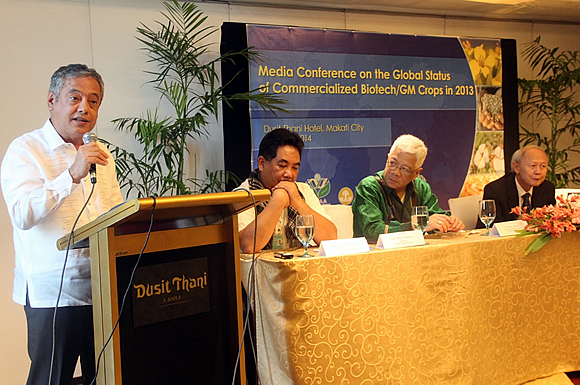 Genetically modified (GM) or biotech crops continued to increase and provide benefits globally and locally in 2013 according to reports of experts during the Media Conference on the Global Status of Commercialized Biotech/GM Crops in 2013 organized by the International Service for the Acquisition of Agri-biotech Applications (ISAAA), SEARCA, and the Biotechnology for Life Media and Advocacy Resource Center (BMARC) at Dusit Thani Hotel, Makati City on 6 March 2014.

Department of Agriculture Undersecretary for Policy, Planning, Research, and Development, Dr. Segfredo Serrano, and Former University of the Philippines (UP) System President and UP Los Baños (UPLB) Chancellor, Dr. Emil Q. Javier, talked about policy developments for agriculture as well as biotech crops, how biotech crops and modern technologies are helping the country, and insights on current issues such as the court case of Bt eggplant. Both also emphasized the safety of the technology and the rigorous safety assessments and national regulatory system for biotech products.

Dr. Gil C. Saguiguit, Jr., Director of SEARCA, concluded the event saying that the “benefits of this technology and its potential to help increase agricultural production for increased food, feed, and fiber productivity in the Philippines and the region as a whole, though gaining fast recognition, must be followed up with continued aggressive promotion.” He also said that the Center will continue to support biotech education and promotion particularly in developing countries.

The conference was attended by journalists from print, TV, radio, and online media. Other participants were members of the academe, government agencies, private sector, non-government organizations, and local government units. The activity also served as a platform for the participants to discuss issues on biotech such as food and environmental safety, and education of the public.

For more updates on biotech developments in the Philippines or in Southeast Asia, visit SEARCA BIC’s website at www.bic.searca.org or send an e-mail to .