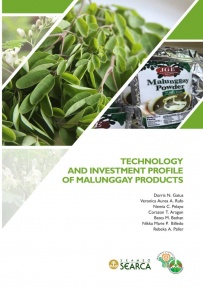 In the Philippines, the number of undernourished people reported in 2003 was 5.2 million, 18% of the total population at that time, and the number has grown since then (FAO et al. 2015). The food consumption surveys conducted by the Food and Nutrition Research Institute in 2013 and 2015 revealed that across population groups, the double burden of malnutrition was prevalent among children, as the trend of chronic malnutrition was observed to be increasing. A significant increase in the prevalence of underweight (21.5%) and stunting (33.4%) was observed in 2015 relative to 2013 (20% and 30.3%, respectively). Survey results also showed that inadequate intake of nutritious foods such as green leafy and yellow vegetables, Vitamin C rich foods, milk, eggs, dried beans, fats, and oils resulted to the inadequacy of most of the essential nutrients. Micronutrients like iron, vitamin A, and iodine are commonly lacking in the diet of Filipino children.

Consumption of malunggay (Moringa oleifera) has been promoted by the World Health Organization (WHO) as a low-cost health enhancer in poor countries around the globe. It is recognized as a food source that can help ease micronutrient deficiency. It contains around 20 types of amino acids, 46 antioxidants, 36 anti-inflammatory compounds, and more than 90 nutrients, which make it one of the best nutritional supplements (Arnarson 2018). It is an excellent source of minerals (e.g., iron, calcium, potassium) and vitamins (i.e., A, B1, B2, B3, B6, C, and E), as well as macro minerals, trace minerals, and phytonutrients. The leaves of malunggay are the most nutritious part of the plant, being a significant source of vitamin B6, vitamin C, provitamin A as beta-carotene, magnesium and protein, among other nutrients reported. Compared to equivalent amounts (in weight) of other foods, the leaves of malunggay contain
seven times the vitamin C in oranges, four times the calcium in milk, three times the potassium in bananas, four times the vitamin A in carrots, and two times the protein in milk. Malunggay is a good source of quality protein and dietary fiber. Regular consumption of malunggay can therefore greatly help in preventing micronutrient deficiency especially among children, a condition that is still prevalent in many parts of the country.