Mainstreaming Agriculture in the Development Agenda 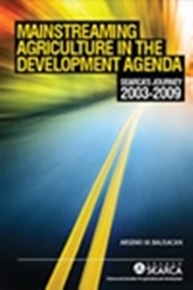 It was 2003, and Asia was recovering from the 1997 financial turmoil that undermined various economies in the region. There was a resurgence of economic growth in the region: Asia’s growth of roughly 6 percent achieved in 2003 came close to the level achieved prior to the East Asian financial crisis in the late early 2000s. This has been accompanied by improvement in living standards, reduction in poverty and food insecurity, rise in literacy, and improvement in health status of the population. This positive trend has largely been fueled by the rapid economic growth in China and India.

However, these changes varied across countries within the region, and across areas or population groups within a country. Poverty and food insecurity have remained to be pressing concerns in most of the  agricultureand natural resource-dependent economies of Southeast Asia. Indeed, in these countries, poverty was -- and still is -- largely a rural phenomenon: two-thirds of the poor lived in the rural areas and were mostly dependent on agriculture and agriculture-related industries for employment and income. Even urban poverty is, in part, a spillover effect of intense deprivation in rural areas where access to education,  infrastructure, technology, and finance is acutely limited.

Meanwhile, Asia and the world were confronting new concerns such as the SARS (Severe and Acute  Respiratory Syndrome) outbreak in 2003, the Indian Ocean tsunami in 2004, unprecedented floodings and  droughts, and national and global security threats.

Within Southeast Asia, various changes have been also occurring. Countries that once had central-economies were transitioning into open-economies. The challenges they faced in this transition were enormous, considering the many and complex demands of a globalized world. In such context, the modalities of delivering development services to these countries needed to be reoriented, if not radically changed.

On the other hand, with the comparatively greater destitution of many African countries, most donor countries and international development community prioritized their financial aids to these countries. Moreover, the rise of international terrorism has led donor governments to revisit their national priorities and allocate a significant portion of their resources to peace and security concerns, resulting in a decline in  international development aid support.

As a consequence, a number of countries in Asia had been de-prioritized as beneficiaries of international aid.

These global and regional developments have had their effects on SEARCA.

SEARCA was established more than 40 years ago, at a time when Asia was the focus of the international development aid community and when the agriculture sector accounted for a significant portion of a  country’s productive outputs.

Today, agriculture’s relative importance in national income has declined sharply for most countries in the developing world, contributing only, on average, roughly one-tenth in the middle-income countries (including China and most Southeast Asian countries). And yet, while this is so, this sector has continued to account for the lion’s share of poverty in these countries, underscoring the need to foster growth in agriculture in order to help lift rural inhabitants out of poverty.