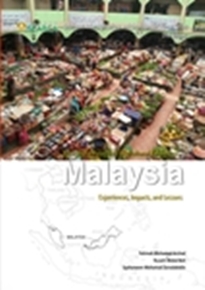 This book is the second edition of the Southeast Asian Agriculture and Development Primer (SAADP) Series for Malaysia, published by the Southeast Asian Regional Center for Graduate Study and Research in Agriculture (SEARCA). The first edition was published in 2005, which aimed to promote awareness of the state of agriculture in Malaysia. This second edition provides updates on the development of agriculture in Malaysia since 2005. This book contains seven chapters, which are summarized below.

Chapter I presents an overview of the Malaysian economy and its relation to the growth and development of the agriculture sector. Following the food and fuel price hikes in 2007/2008 and the global financial crisis in 2009, the economic growth of Malaysia dropped, but, due to strong domestic demand, managed to recover with an average annual growth of 4.7 percent between 2000 and 2012. Similar to other developing countries, Malaysia has focused on the development of the industrial sector, such as manufacturing and services. The contribution of agriculture, which had an annual rate of growth of 2.9 percent, to the country's GDP declined from 8.6 percent in 2000 to 7.7 percent in 2011. However, in terms of absolute value, its contribution increased by 40.6 percent with an annual rate of growth of 3.2 percent, which is lower than the national economic growth average of 4.7 percent. The service sector's share increased from 45 percent to more than 50 percent, indicating the growing strength of this sector. Despite the two world crises, the country's economy has remained resilient and, with the exception of rice, selected subsectors of the agriculture sector (particularly palm oil) perform quite well. The growing importance of agriculture, particularly in food security, has prompted the government to focus on agriculture as embedded in relevant policy documents such as the National Food Security Policy, Ninth (9MP) and Tenth Malaysia Plans (10MP), National Agro-food Policy, National Commodity Policy, and two National Key Economic Areas (NKEA)—agriculture and palm oil—under the broad Economic Transformation Plan (ETP) for the whole economy. The agriculture sector received special attention in a number of cluster or regional development plans initiated to enhance economic growth in line with the ETP.

Chapter II reviews the development of Malaysian agriculture with special emphasis on palm oil, fisheries, and forestry. The direction of the sector was set by the British when Malaysia was still its colony, by concentrating on export crops such as rubber, palm oil, and cocoa in the 1960s. The legacies of this policy remain intact at the turn of the 21st century with some adjustments. As of 2011, the duality, export versus food crops, is still apparent. Export crops continue to dominate land use, usage of labor, export earnings, and downstream activities. In the same year, palm oil contributed 37 percent to agricultural GDP, rubber 8.8 percent, while food crops accounted for about 17.2 percent. Industrial crops accounted for 84 percent of the total land use compared to 80 percent in 2000. Agriculture labor accounted for about 11 percent of the total labor in 2011. Malaysia's strength in palm oil was maintained in 2011 when it was the world's largest exporter, although in terms of production, the country was second to Indonesia.

In terms of agricultural trade, Malaysia achieved an increased surplus, but not in food. The heavy focus on industrial crops has undermined the food sector in that the country is dependent on imports for major food items (cereals, fruits, vegetables, food, and beverages) and agricultural inputs (seeds, fertilizer, pesticides, feedstuff for livestock, agricultural machines, and workers). This explains the lack of competitiveness in the food industry in Malaysia. The food trade deficit increased from MYR 4.9 billion to MYR 13.9 billion in the said period. The country's food security was challenged by the world food crisis in 2008. As a response, Malaysia has extended its interventionist strategies by providing more subsidies to increase paddy production.

To address the issue of depleting fish resources, aquaculture development was pursued, which has been quite successful in meeting local demand. Similarly, the forest resource sector received a number of initiatives to ensure sustainability and conservation. As proven in 1997, the Malaysian agricultural sector dampens the effects of shocks to the economy, a function which was replicated again in 2009. Hence, the country is in the right path of bringing the sector back to the fore as the strength of the sector lies in its multifunctional roles—economics, environment, social factors, preserving biodiversity and conserving natural resources.

Chapter III examines the major problems and challenges facing the agriculture sector. The previous policies painted the current structure of the sector. The major ones are: first, the drive toward industrialization in the 1980s which sidelined the agriculture sector in terms of budgetary allocations and support. Second, within agriculture, the bias toward export industrial crops (particularly through the estate plantations) has left the food sector with relatively little support. These two policy stances are affecting the flow of resources in the economy. The rapid development of the industrial sector is pulling away land, labor, and capital out of the agricultural and rural sector, which results in rising wages and labor shortages in plantations. In addition, the export crop-centric policy has sidelined the food sector and the independent smallholders.

The shortage of labor causes the influx of cheap foreign labor into the country, which in 2011 amounted to 1.5 million workers. The divide between the industrial crops and food crops grows larger as amplified by bigger deficits in food trade. A Food Balance of Trade Plan to achieve a surplus of MYR 1.2 billion in 2010 had to be abandoned due to a number of structural and institutional deficiencies in the food sector, which remain unrectified. These are: small and uneconomic farms, and lack of innovations in development of new varieties and postharvest technology, inefficient and crowded marketing system, lack of efficient information structure, and other support. These factors also contribute to the gap between the large-scale producers and the independent smallholders.

In general, the productivity of the Malaysian agricultural and food sector is lower than the optimum achievable. Besides other constraints mentioned earlier, the lack of appropriate research and development is responsible for this. Despite these problems, the food sector holds a good potential for the future as the rise in population and income has increased the demand for both high quality and processed food. However, the country has to address the supply constraints in order to meet continuous demand for food and agricultural raw materials in the future.

Several levels of economic planning exist in Malaysia, from the longer-term (10 years) Outline Perspective Plan (OPP) to the five-year Malaysia Plans. Chapter IV discusses some of the agricultural policies outlined in these plans implemented since 2000. The Third OPP (3OPP, 2001–2010) discusses the need to increase food production to meet the growth in domestic demand and exports. The establishment of “permanent food production areas and agrotechnology park” mentioned in the 3OPP is designed to increase the scale of agricultural enterprises, to medium and large scales, thereby encouraging the use of modern technology and increasing productivity. To facilitate exports, market research activities should be intensified.

The Eighth Malaysia Plan (2001–2005) echoed the initiatives mentioned in 3OPP, while the 9MP (2006–2010) introduced the term “New Agriculture,” which encompasses “large-scale commercial farming, wider application of modern technology, production of high-quality and value-added products, unlocking the potential in biotechnology, increased convergence with ICT, and the participation of entrepreneurial farmers and skilled workforce.” As agriculture is considered the “third pillar of growth” for the economy, the 9MP creates new land development or zones for production of fruits, vegetables, aquaculture, and livestock. Five high-impact projects were initiated: permanent food production, aquaculture industry zone, the national feedlot center, contract farming, and developing agripreneurs. The 10MP (2011–2015) mentions the two NKEA—palm oil and agriculture—announced earlier by the Government Transformation Programme.

Other than the national economic plans, the government also formulates specialized plans. The Third National Agricultural Policy (2001–2010) is formulated with the objective of maximizing income through optimal utilization of resources. In view of the food/fuel price hikes in 2007/2008 and the global financial crisis in 2009, the agri-food sector has been prioritized in the national agriculture policy as stated in the National Agro-food Policy (2011–2020). The National Commodity Policy (2011–2020) looks at the industrial crops sector.

In terms of implementation mechanisms, three ministries are directly involved in primary agriculture: the Ministry of Agriculture and Agro-based Industries, Ministry of Plantation Industries and Commodities, and Ministry of Natural Resources and Environment. Recognizing the importance of regions in development, five regional development areas have been created: Iskandar Development Region, Northern Economic Region, East Coast Economic Region, Sabah Development Corridor, and Sarawak Corridor of Renewable Energy. Each of these regions covers a large area mostly situated in rural areas and agriculture is specifically mentioned as a thrust area in all regions.

To improve the implementation and delivery of government services, the government created the Performance Management Delivery Unit (PEMANDU) in 2009 to oversee the ETP. Twelve entry point projects were initiated, two of which involve agriculture—palm oil and agriculture. Chapter V evaluates the performance, impacts, and lessons learned from these policies. In general the problems raised in the third chapter still remain. The high impact projects show mixed results. The permanent food production parks managed to meet its targets of increased food production (fruits and vegetables) and developing agripreneurs. A thorough evaluation has not been made of the Aquaculture Industry Zone due to insufficient information. The National Feedlot Centre has been mired in controversy and it is doubtful that the target of increasing beef production has been met. From available information the contract farming project has been able to meet its targets of increasing fruit and vegetable production and developing agripreneurs.

Chapter V also discusses the performance of the two NKEA involving agriculture under the ETP. In general, the targets have been met. The most important lesson to be learnt from the policies is that institution matters. The creation of PEMANDU has injected a high level of dynamism into the planning and implementation of development projects. PEMANDU's inclusive and participatory approaches ensure that priority areas are selected. Another important lesson is the realization of the importance of markets. In fact the concentration on specific projects, and involving the private sector, makes monitoring and evaluation possible and ensures the sustainability of projects.

The emerging challenges and opportunities of Malaysian agriculture are discussed in Chapter VI. First, under a rapid transformational economy, the revival of agriculture may be tough due to the stronger pull from the industrial sector. Second, the rationalization of subsidies, which are deeply rooted in the paddy and fisheries sectors, may face resistance, at least in the short term. Third, the new supply chain marginalizes the small retailers and farmers. Fourth, the small farmers and smallholders have not experienced much transformation despite rapid national economic growth. Fifth, policy coherence is still lacking in ensuring effective delivery of policy strategies. For the future, Malaysia should take advantage of the benefits of urban agriculture as well as the halal market.

The conclusion and recommendations are provided in Chapter VII. In the last decade, Malaysian agriculture as a whole has continued to make way for the industrialization process in the country. Industrial crops continue to dominate and may probably reach a turning point as Malaysian palm oil production is now ranked second only after Indonesia. With future land limitations, palm oil may go on the path taken by the natural rubber and cocoa industries, which have completed their “commodity cycles.” Then food sector may flourish, albeit slowly, in view of growing demand and structural constraints on the supply sides. Malaysia has placed a number of policy innovations, particularly the ETP, to spearhead the sector. With the right implementation strategy, the agriculture and food sectors may hold big promise for the future.