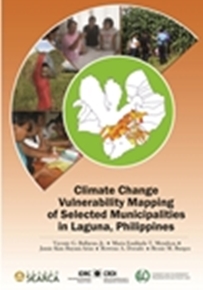 Climate change is the most recent crisis of global impact, and can be most detrimental to developing countries. Southeast Asia, in particular, has been noted as one of the regions most vulnerable to climate change. The objectives of the study were to measure the vulnerability of communities to climate change and to produce maps of each community’s relative vulnerability with respect to the commune and the agricultural sector. Three vulnerability determinants—exposure, sensitivity, and adaptive capacity—and their respective indicators were determined. Exposure refers to damage potential while sensitivity is determined by the interaction of environmental and social forces. Finally, adaptive capacity is shaped by various social, cultural, political and economic forces. The overall index of climate change vulnerability was calculated using a compromise among the three identified indices and ranked to identify the most vulnerable communes. Using GIS software, overall vulnerability maps were produced. Results showed that mostly lowland and coastal areas are greatly affected in all the vulnerability determinants. Agricultural areas are also more vulnerable, hence, livelihood of communities in agriculturally-dependent areas will be greatly affected by climate change. Exposure to climatic hazards had the least number of vulnerable sites, as Laguna is not hit by typhoons as often as other parts of the Philippines. However, the number of vulnerable sites increased due to high sensitivity and low adaptive capacity, both factors contributing to half of the study sites being vulnerable. This implies that should Laguna become frequently hit by typhoons in the future due to changes in climate, the area will be highly susceptible to damage because its capacity to adapt is too low.