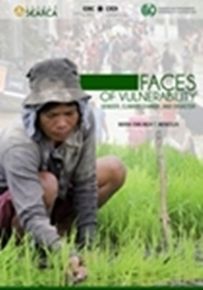 The understanding of vulnerability both at the household and individual level, as well as the sectoral and community level, was enriched by the research on social vulnerability and gender under the project entitled “Building Capacity to Adapt to Climate Change in Southeast Asia.” The study was conducted in the province of Laguna in the Philippines with the aim of identifying who are vulnerable, and analyzing why they are vulnerable, and how they adapt to the risks of climate change and climatic hazards. The gender perspective in the research process was given emphasis. The study looked into how climate change-induced hazards affected men and women differentially, how they cope with these hazards, and in what household adaptation measures do women play important roles. Findings discussed in this publication came from data generated from a number of methods, including a barangay-level survey, focus group discussions, key informant interviews, and cases from in-depth interviews.

Typhoons and floods are the main exposures of communities in the study area, with lakeshore barangays having a higher exposure to flooding and prolonged inundation. However, it was noted that human, social and economic sensitivity to these hazards has a major contribution to overall vulnerability. The number of vulnerable barangays increased significantly based on sensitivity and adaptive capacity indicators, compared to just exposure indicators.

The elderly, women in various circumstances, farmers and fisherfolks, lakeshore residents and those living near bodies of water, and the poor were found to be vulnerable sectors. The agricultural sector is also significantly vulnerable to climate change-related hazards and disasters. Typhoons and floodwaters brought damages and difficulties in rice farming, hogs and livestock raising, poultry and duck egg production, aquaculture, and vegetable and fruit farming.

The elderly was also a sector indicated as highly vulnerable to the impacts of climate change – induced hazards mainly because of their physical and health conditions. Women are also adversely affected by typhoons and flooding due to greater demands on their traditional roles in the home, and the disruption in the gender division of labor both in the household, in the farm, as well as the community level.

Gendered division of labor during and after disasters show overrepresentation of women. This is usually most apparent in agriculture and among informal settlers. Findings indicated that men and women equally contribute more work hours in production, harvesting and marketing activities as a result of climate-related hazards
and disasters. However, non-productive work such as household chores and many care-giving tasks, such as caring for the children, sick, elderly, the home and assets increases only for women, but not so much for men. Additional burden for men comes in the form of more energy and time required of them to begin the restoration and rehabilitation given damages due to disasters.

The family network remains to be an important source of social capital for climate change adaptation and disaster risk management. Bonding social capital remain to be the main strength of households especially in times of disasters.