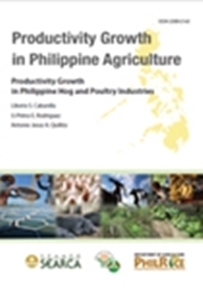 The hog and poultry industries are important growth points in Philippine agriculture, posting positive growth rates even while the other sectors are contracting. Prospects for continued growth, however, are less bright in the advent of increasing competitive forces brought about by pressures of globalization.

This study provided an analysis of the growth in total factor productivity (TFP) for the poultry and hog industries. For poultry, the Törnqvist Index approach based on input-output data was used to estimate TFP growth between 1994 and 2000. For hogs, the stochastic frontier approach was implemented using farm survey data from the provinces of Batangas and Laguna which were gathered in 2003 and 2008.

The results indicated a 15 percent growth in TFP in poultry, attributed primarily to the increasing commercialization of the industry. In hogs, TFP growth was 3.5 percent largely due to the firms’ adjustment toward their optimal scale of operation.