Investments in Research, Development, and Extension: Implications on TFP 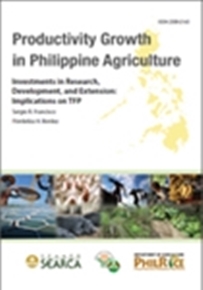 Total factor productivity (TFP) is one of the key drivers of economic growth. An important driver of productivity growth is research, development, and extension (RD&E). Investment in RD&E yields a flow of benefits to producers and consumers over many years. Benefits from RD&E arise when farmers use new technologies to lower their costs or increase the value of their products by improving their quality or other
attributes.

There was a decreasing trend in RD&E intensity from 2001 to 2004 until an increase was noted in 2005. The average agricultural extension intensity was 0.19 percent. The trend in extension intensity followed a pattern similar to that of total RD&E. Similarly, R&D intensity was 0.20 percent in 2001 and ended at 0.08 percent in 2005, averaging 0.11 percent for the five-year period. This persistently low investment in R&D has contributed partly to the lag in agricultural productivity in the Philippines compared with its Asian neighbors. Using a cost framework, this study measured the contribution of public investments in R&D, extension, production subsidy, and irrigation in reducing rice production cost in the Philippines. The shadow share was used as a measure of marginal return to public investments in determining the need for further investments. This study also decomposed the growth in TFP of rice into scale economy, improvement in capacity utilization due to public investments, and rate of technical change. Results indicated that R&D generated cost savings and improved rice productivity. This implies that further investment in rice R&D is necessary. Results also showed that investment in production subsidy was counterproductive, which supports the call to phase it out. Inefficiencies in extension and irrigation investments were also observed. This suggests that reforms in the current extension system and a re-orientation of irrigation development strategies should be done to reap the potential benefits from these investments.