Characteristics of Farm Holdings: Evidence from the Philippines' Census of Agriculture 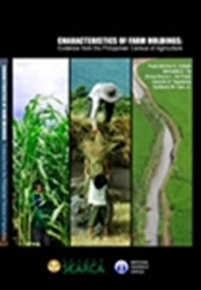 The Philippine Census of Agriculture (CA), which reflects the performance of the agricultural sector through the years, presents data essential in effective implementation of strategic policies and resolutions to  improve agriculture in the country. The National Statistics Office (NSO) is responsible for gathering data for the CA, which began in 1960 and has since been conducted every decade. A complete count of all farm operators in the Philippines, the CA collects data on the basic structural characteristics of each farm (e.g.,
size and location, tenure status, main use of land, crops planted, livestock or poultry raised, agricultural practices, type of irrigation used, farm equipment or machineries used, and demographic characteristics of the agricultural operators and their household members).

This study analyzed the results of the 2002 CA and compared it to the findings of the 1991 Census of Agriculture and Fisheries (CAF) to determine if the agricultural sector improved because of policy change, technological improvement, or a shift in demands or other factors. To meet the study objectives, the following variables were explored: farms and farm sizes, cropping pattern vis-à-vis irrigation system, shift in major crops and geographical variation in cropping density, shift in land use, and tenure of holdings. Their differences across time and/or space were also assessed.

The study showed that from 1991 to 2002, the number of farms had increased while farm area and average farm size had decreased. This did not apply to Region II, which experienced an increase in farm area. However, a generally decreasing trend of the computed Gini coefficients for both regions and provinces signaled a improvement in farm distribution. This indicates a more equal distribution of farms in 2002 than in 1991.

For corn, the dominant cropping pattern in Region II and Region X in 1991 and 2002 was the same-crop pattern. Meanwhile, the different-crop pattern was practiced more in Region VI. In 2002, the irrigation system that was commonly used in corn farms in the three regions was “others,” which included water fetching and windmills. As in palay farms, the use of irrigation for corn farms likewise increased.

Banana and coconut were among the top five permanent crops in Region II, Region VI, and Region X from 1991 to 2002. Region X shared the highest number of banana hills and coconut trees, the largest land area planted with banana and coconut, and the least cropping density for both crops. In the three regions, both crops showed a decreasing trend in farm area, which could be attributed to shift of crop, conversion to non-agricultural land, and the implementation of Comprehensive Agrarian Reform Program (CARP). An
upward trend was also noted in the cropping density of banana and coconut in the three regions as a means of increasing production to meet local and global demand for said crops.

In terms of the number of farms and farm area, there was no major shift in main land use in the three regions from 1991 to 2002. Farms were used in raising temporary crops, of which rice and corn, being the staple food of the Filipinos, shared the largest portion. The portion of farms with homelot as the main land use rose in the three regions. This can be attributed to the programs addressing housing needs, especially for the urban poor. Region X indicated a major shift in the second most common land use, from permanent crops in 1991 to homelot in 2002.

The most common form of tenure status in the three regions was fully-owned/owner-like possession. Tenure status improved in Region II and Region VI, which indicates the effect of CARP implementation.  However, such improvement was not observed in Region X.