The Use of Nano-chitosan as Biofungicide Against Phytophthora capsici on Four Chili Cultivars in West Java, Indonesia for Sustainable Agro-industry Applications 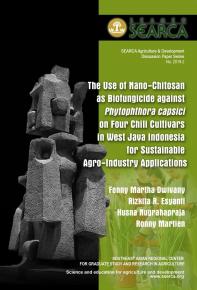 Chili is one of the primary commodities in West Java, Indonesia. Chili peppers are susceptible to several diseases, which can cause excessive losses in quality and quantity. The research focused on four chili pepper cultivars that are commonly used by farmers and preferred by the market. Phytophthora capsici is the most dangerous pathogen because it attacks every phase of the life cycle of chili peppers, from the seedling stage until the postharvest stage.

This research will study the effectiveness of nano-chitosan in protecting the six cultivars of chili pepper against Phytophthora capsici. The project aimed to examine the efficacy of nano-chitosan on chili pepper plants and to analyze the molecular aspect of plant-pathogen interaction through whole transcriptome analysis.

The specific objectives of the research are the following:

The project was conducted at Bandung and Purwakarta, West Java, Indonesia. The Plant Pathology Laboratory and Green House research facilities from East-West Seed Indonesia Company was used in Purwakarta, while the genetics and molecular biology laboratory in the School of Life Science and Technology (SITH), Institut Teknologi Bandung, was utilized in Bandung.

The research focused on four chili pepper cultivars that are commonly used by farmers and preferred by the market. The four cultivars represent the variation of resistance level against Phytophthora capsici.