The Rice Economy and the Role of Policy in Southeast Asia 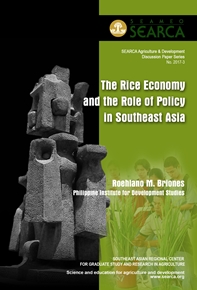 Rice is the key staple of Southeast Asia (SEA), as well as one of its most widely grown crops. The region includes some of the largest rice producers in the world, together with two of the top three exporters (Thailand and Vietnam), and two of the world's top importers (Indonesia and the Philippines). The region has gained prominence as an early adopter of key production innovations, such as modern inbred varieties and hybrid rice.

Policy is a key driver of the rice economy, alongside market forces, technology, and the environment. Production support policies, such as public investments in irrigation, the extension bureaucracy, as well as credit and input subsidies, were instrumental in the spread of modern rice varieties. Up to now, rice commands the most public resources in SEA compared with any other crop. Governments have also intervened actively in rice markets, invoking the key role of rice in food security and livelihoods.

On the other hand, the region is also active in the promotion of regional economic integration, spearheaded by the Association of Southeast Asian Nations (ASEAN). Its 10 member states: Brunei Darussalam, Cambodia, Indonesia, Lao People's Democratic Republic, Myanmar, Malaysia, the Philippines, Singapore, Thailand, and Vietnam, cover all the independent territories of SEA, except for Timor-Leste.

This background paper for the Rice Policy Roundtable takes a timely look at rice policies in SEA to offer guidance for policymakers and other stakeholders under current and future market realities. It focuses on developing economies in the region, namely, the CLMV countries (Cambodia, Lao PDR, Myanmar, and Vietnam), and the ASEAN-4 (Indonesia, Malaysia, the Philippines, and Thailand).

The objectives of the Roundtable were:

The remainder of this background paper is organized as follows: Section 2 provides a background on Southeast Asian rice economies by examining longterm trends and outlook on the future of the rice economy; Section 3 presents the various policy regimes for rice in developing SEA; Section 4 provides a synthesis and critical assessment of these policies; and Section 5 concludes and identifies knowledge gaps as a guide to future policy research.