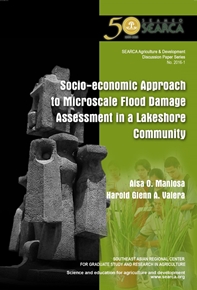 This study sought to determine microscale damage estimates of the largest flood event in the history of the municipality of Jabonga in the province of Agusan del Norte. Jabonga is a lakeside municipality adjacent to Lake Mainit, the fourth largest lake in the Philippines. The study sought to on  determine flood-prone areas in the municipality, characterize the flood event that occurred in the site from December 2010 to March 2011, estimate actual and potential damage for different flood scenarios, and determine variables that are significantly related to flood vulnerability and flood damage.

A total of 870 households were surveyed. In the flood hazard zone, livelihood areas, particularly farms, are inundated for a month on average. Some houses are also inundated for about the same duration. Inundation time at the municipality scale is shorter. Results showed that the municipality is vulnerable, with about 90 percent of the damage to livelihood coming from the agriculture sector. Damage to the house, properties or belongings inside the house, and health also constitute significant costs.

The study found that the duration of inundation of the work area is among the most important variables that determines level of damage. Unlike flash floods, flood resulting from lake overflow persists for a longer time and inundates important agricultural areas for over a month.

Results of probit regression showed that in the hazard zone, monthly household income, land area farmed, number of livestock owned, frequency of flood incidence in the homes, flood velocity, and duration of inundation at the work area are variables significantly related to household flood vulnerability.

The computed vulnerability coefficient was used as a variable in the flood damage model ran through tobit regression. Results showed that in the hazard zone, predicted vulnerability to flooding, total household monthly income, type of main occupation, farm area, and number of livestock heads owned are the significant variables.

Using the flood damage model, the study found that for a flood that inundates a livelihood area for a duration of seven days, a household could incur damage amounting to at least PHP 7,686.83. The figure could climb higher to PHP 9,911.52 if duration of inundation lasts for 40 days.