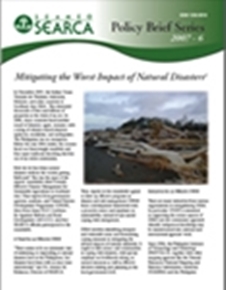 In December 2005, the Indian Ocen Tsunami hit Thailand, Indonesia, Malaysia, and other countries in Southeast Asia (SEA). This destroyed thousands of lives and billions of properties at the wink of an eye. In 2006, Asian countries faced another round of disasters, again tsunami, with a string of climate-related disasters: typhoons, mudslides, and earthquakes. The Philippines was no exception. Before the year 2006 ended, the country faced one heavyweight mudslide and four strong typhooms knocking the lives out of an entire community.

To anchor deeply the DRM concept, the Asian Disaster Preparedness Center (ADPC) offer regional, program based, and tailor-made training courses for community-based disaster mitigation and preparedness. The University of the Philippines Los Baños also conducts a study towards modeling and analysis of climate variability as well as seasonal climates forecasting and its applications to agriculture.