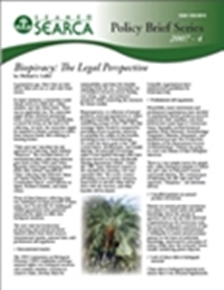 A generation ago, there were no laws about what you can or can’t take from nature.

In many instances, a researcher could simply arrive at a field site, collect samples, and take them home. There was no applicable law. The researcher might obtain informal permission from a local community or landholder, as much for being on the land as for collecting. At most, the researcher might be required to obtain a permit to collect from national lands, like a fishing or hunting license.