Flood- and Typhoon-Proofing Communities: Learning from the Vietnam Experience 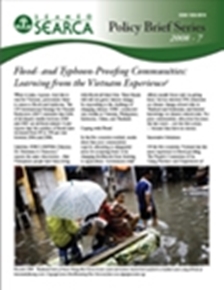 When it rains, it pours. And this is true for Vietnam, particularly when it comes to floods and typhoons. The UN International Strategy for Disaster Reduction (2007) estimates that 84% of all disaster deaths between 2000 and 2005 are all flood-related. It also reports that the number of floods have increased from 60 to 100 per year between 2004 and 2006.

Likewise, IDRC’s EEPSEA Director, Dr. Herminia A. Francisco,2 reports the same observation – that Vietnamese people have been living with floods all their lives. These floods will still rise given climate change. In responding to the challenge of changing climate, IDRC conducted case studies in Vietnam, Philippines, Indonesia, China, and Thailand.

In the five countries studied, results show that poor communities cope by relocating to designated areas; by accepting food; or by changing livelihood from farming to aquaculture. Government relief efforts usually focus only on giving food. Surveys showed 35% awareness on climate change-realted risks. For poor communities, relocation becomes the last resort - not the first action-because they have no money.