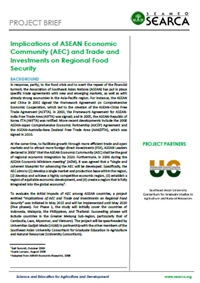 In response, partly, to the food crisis and to avert the repeat of the financial turmoil, the Association of Southeast Asian Nations (ASEAN) has put in place specific trade agreements with new and emerging markets, as well as with already strong economies in the Asia-Pacific region. For instance, the ASEAN and China in 2002 signed the Framework Agreement on Comprehensive Economic Cooperation, which led to the creation of the ASEAN-China Free Trade Agreement (ACFTA). In 2003, the Framework Agreement for ASEAN-India Free Trade Area (AIFTA) was signed; and in 2005, the ASEAN-Republic of Korea FTA (AKFTA) was ratified. More recent developments include the 2008 ASEAN-Japan Comprehensive Economic Partnership (AJCEP) Agreement and the ASEAN-Australia-New Zealand Free Trade Area (AANZFTA), which was signed in 2010.

At the same time, to facilitate growth through more efficient trade and open markets and to attract more foreign direct investments (FDI), ASEAN Leaders declared in 20031 that the ASEAN Economic Community (AEC) shall be the goal of regional economic integration by 2020. Furthermore, in 2006 during the ASEAN Economic Ministers meeting2 (AEM), it was agreed that a "single and coherent blueprint for advancing the AEC will be developed. Specifically, the AEC aims to (1) develop a single market and production base within the region, (2) develop and achieve a highly competitive economic region, (3) establish a region of equitable economic development, and (4) create a region that is fully integrated into the global economy3.

To evaluate the initial impacts of AEC among ASEAN countries, a project entitled "Implications of AEC and Trade and Investments on Regional Food Security" was initiated in May 2015 and will be implemented until May 2020 (Five phases). For Phase 1, the study will initially cover the countries of Indonesia, Malaysia, the Philippines, and Thailand. Succeeding phases will include countries in the Greater Mekong Sub-region, particularly that of Cambodia, Laos, Myanmar, and Vietnam). The project will be spearheaded by Universitas Gadjah Mada (UGM) in partnership with the other members of the Southeast Asian University Consortium for Graduate Education in Agriculture and Natural Resources (University Consortium).

The study aims to analyze the potential impacts of AEC on existing trade agreements, flow of investments, and related commitments among the ASEAN member States (AMS) and across existing ASEAN FTAs, and its implications on food security in the Region. Project Activities

The Final Report Writing aim to finalize the report and prepare for the second phase based on the insights and lessons learned.

Time series analysis was used for establishing trend lines and carrying out projections. Identifying trends using historical data and establishing relationships between variables was a useful tool in understanding the present state to extrapolate similar relationships and anticipate likely events in the future. Although there is a degree of inaccuracy attached to the projections, trend analysis provided a better understanding on the range of possible scenarios in the future that will inform the most critical areas of research to further guide the succeeding phases.

There was a wide range of information available from secondary data sources, including open access databases that provided production and trade-related data for key food commodities among ASEAN and AMS. This included both time-series and cross-section data on production, consumption, exports, imports, tariffs, and trade rules.