Re-inventing the Face of Agriculture

Prof. Dr. Ir. Khaswar Syamsu, a Professor and the Head of the Bioindustry Division at the Department of Agroindustrial Engineering, IPB University in Bogor, Indonesia, was awarded a SEARCA Regional Professorial Chair Grant for AY 2021-2022. The award was granted to him in recognition of his contributions in the field of agricultural technology and innovation. Prof. Dr. Khaswar is also currently IPB University's Head of the Bioprocess Engineering Laboratory at the Research Center for Bioresources and Biotechnology, and the Director of Halal Science Center. According to him, receiving the grant is a form of acknowledgment and appreciation of his contributions to the region. SEARCA's stringent process of selecting the awardees includes evaluating the candidate's academic achievements, research, patents, publications, training, and community service engagements. To date, Prof. Dr. Khaswar is the second professor from IPB University to receive the award after Dr. Anuraga Jayanegara in 2017-2018. 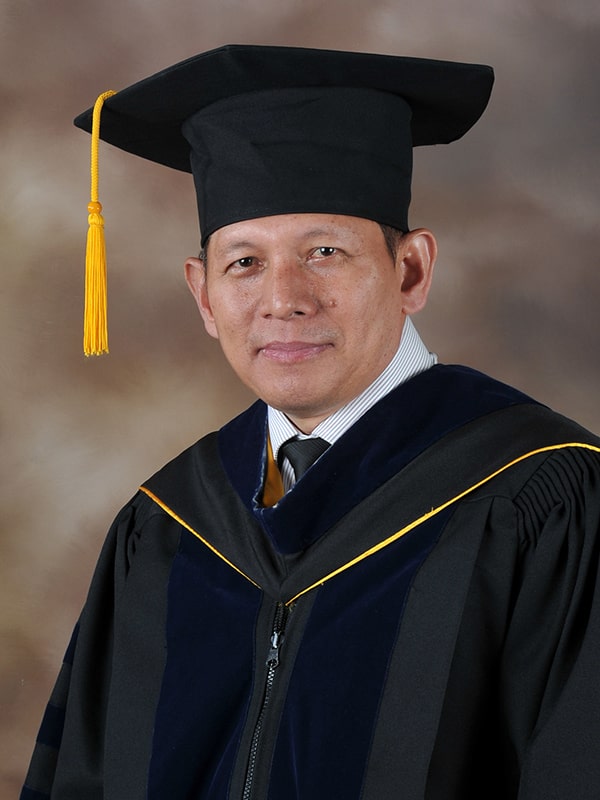 Prof. Dr. Khaswar's journey in teaching was not without challenges. He enjoyed studying as a child and then passing on his knowledge to others. Prof. Dr. Khaswar came from an impoverished family and was the third child out of nine siblings, making it hard to buy learning materials. In high school, he would borrow books from a friend whose family can afford them. In exchange, he would teach his friend what he has learned.

Prof. Dr. Khaswar almost did not complete his Bachelor of Agricultural Technology at the Department of Agroindustrial Technology, IPB University in 1986 due to lack of funds for his final research project. He completed his research with the encouragement and assistance of his supervisors, who helped purchase the chemicals. It was also his undergraduate supervisor who encouraged him to apply for a lecturer position at IPB University.

Becoming a lecturer has afforded Prof. Dr. Khaswar great opportunities to expand his knowledge and creativity. He received a scholarship to pursue his Masters in Biotechnology in 1988 from the World Bank XVII through the Inter University Center (IUC) of Biotechnology at IPB University, and his PhD in Chemical Engineering through a scholarship from the Department of Chemical Engineering at the University of Queensland in 1992. After receiving his PhD degree, he served as Assistant Director of Cooperation and Development at IUC Biotechnology. He also received fellowships for Post-Doctoral Research and Training at GBF Braunschweig, Germany; Cardiff University of Wales, United Kingdom; International Agricultural Center in the Netherlands; Michigan State University; and the University of California, Davis, USA. 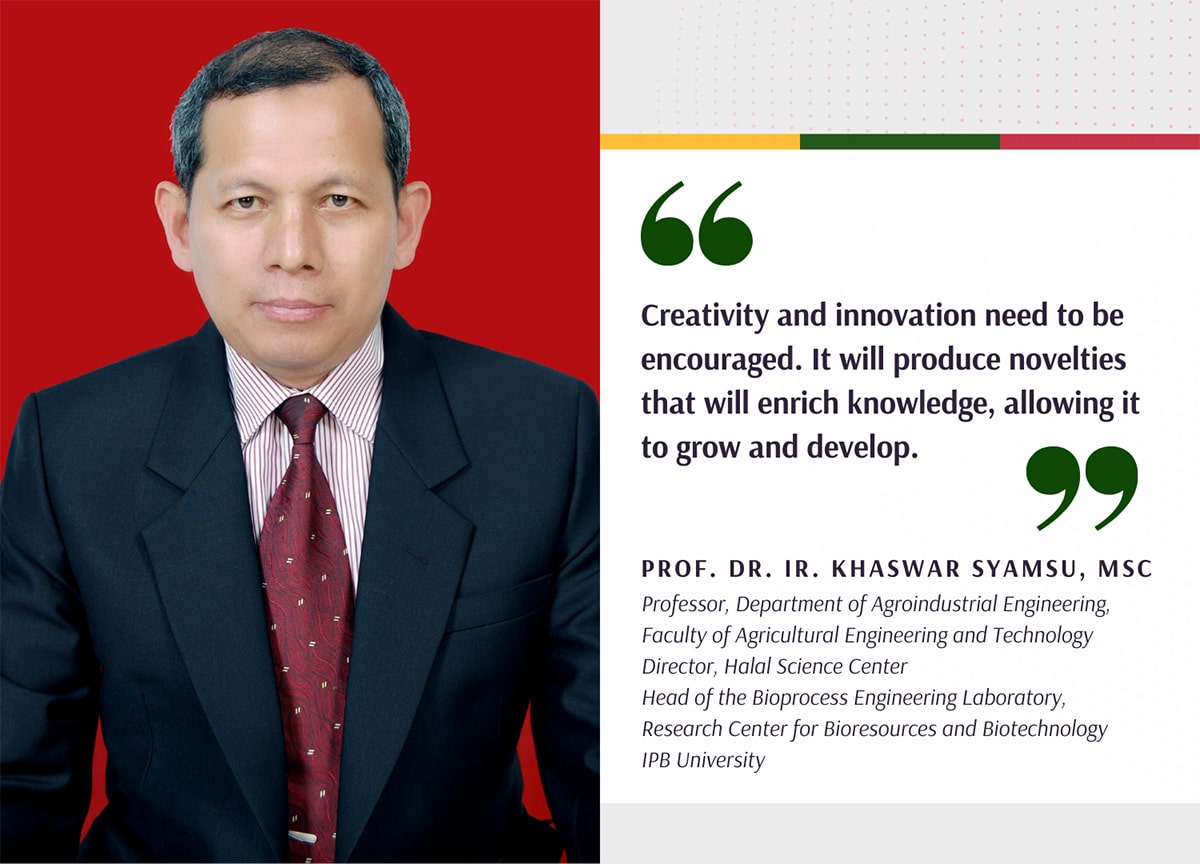 Prof. Dr. Khaswar believes that creativity and innovation need to be encouraged. It will produce novelties that will enrich knowledge, allowing it to grow and develop. Through his encouragement and guidance, Prof. Dr. Khaswar along with his colleagues and students were able to obtain 13 Patent Registration Grants, among which 11 patents have been granted. 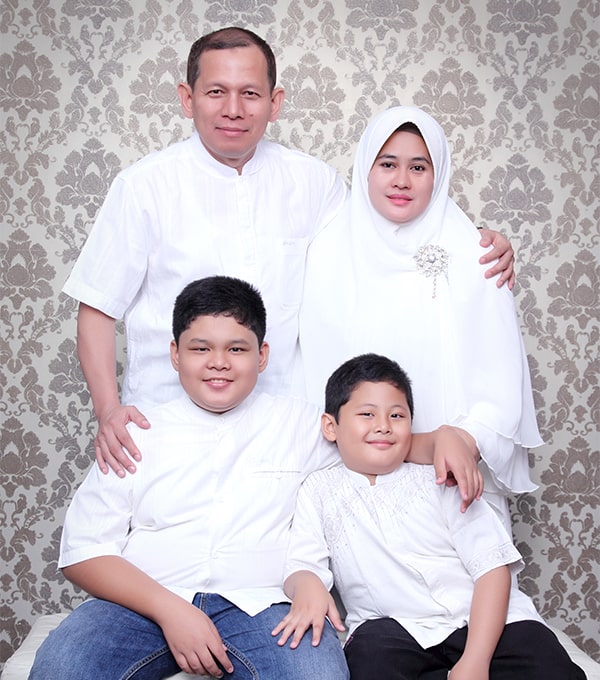 From almost not finishing his undergraduate research, Prof. Dr. Khaswar now has contributed greatly to his country through his innovative research on environmentally friendly products such as bioplastics, bioenergy/biofuel, biofertilizers, bioinsecticides, and non-wood paper, to name a few. These research projects granted him the Patents and Most Prospective Innovations since 2008, the Extraordinary Intellectual Property Award from the Indonesian government, and a Professorship in 2009. For the past five years, Prof. Dr. Khaswar has published more than 60 articles as lead or co-author in scientific journals and was also recognized, for five consecutive years, by the Business Innovation Center established by the State Ministry of Research and Technology of Indonesia for his innovative projects.

If given the chance to create a policy that would help the agriculture sector, Prof. Dr. Khaswar envisions efficient land use for food (as a food estate) and energy (as an energy estate). If the domestic food needs are met, then food can be exported to other countries in need. The government can handle the oversupply of agricultural products by purchasing them at a fair price, storing, preserving, or processing them into value-added products. An example of this is using agriculture products containing sugar or starch as a cheaper source of bioenergy/biofuel or first generation of bioethanol. Lignocellulosic materials as by-products or waste can also be processed as second generation of bioethanol. 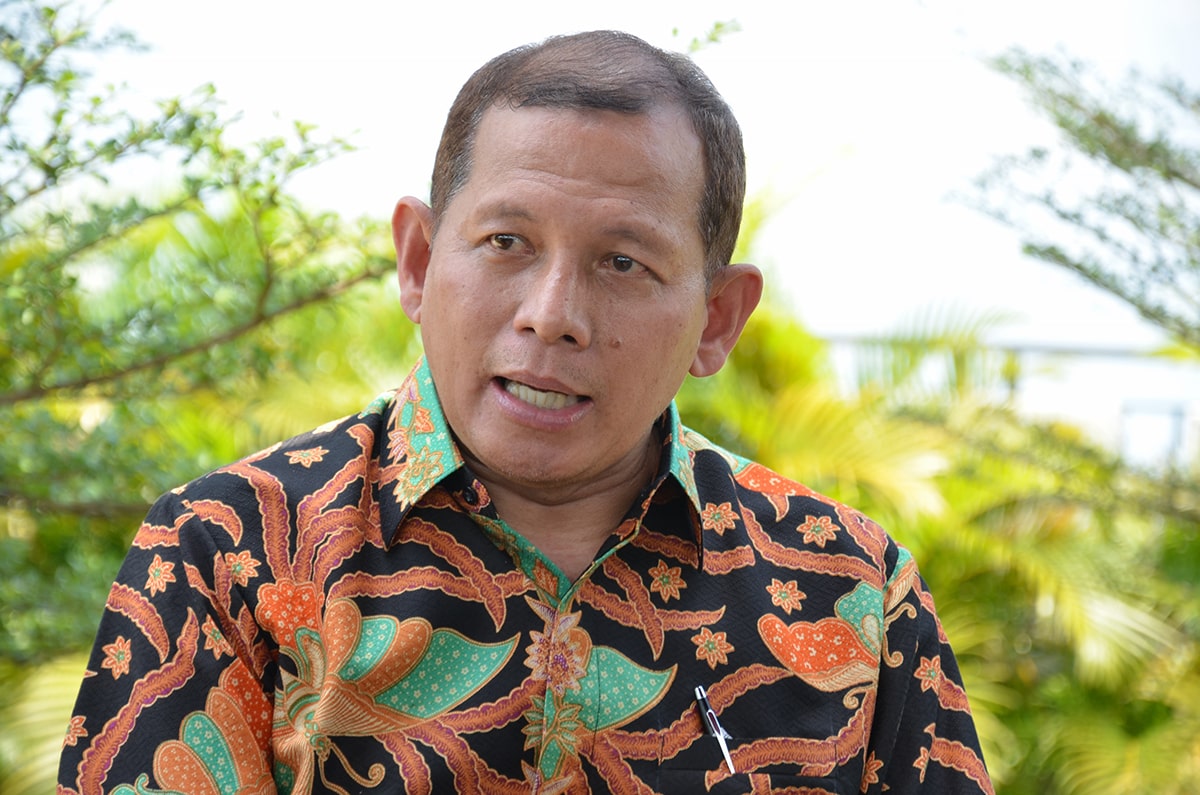 The pursuit for a renewable energy source has been the rationale of Prof. Dr. Khaswar's presentation on "Increased Bioethanol Production Directly from Sweet Sorghum Bagasse using Mold and Yeast" on July 6, 2021, during his public lecture as part of the SEARCA Regional Professorial Chair Grant. He discussed the production techniques of bioethanol from sweet sorghum bagasse using mold and yeast through Engineered Simultaneous Saccharification and Fermentation or SSF. This alternative energy source can solve scarcity in energy, and it will not compete with food materials.

Prof. Dr. Khaswar further plans to expand his research on other bioethanol production techniques. He believes that through bioprocess engineering, the challenges of using lignocellulose can be solved. He also hopes to share his knowledge and research studies with fellow lecturers, researchers, and the youth, to inspire them to create innovative technologies for the development of their country.