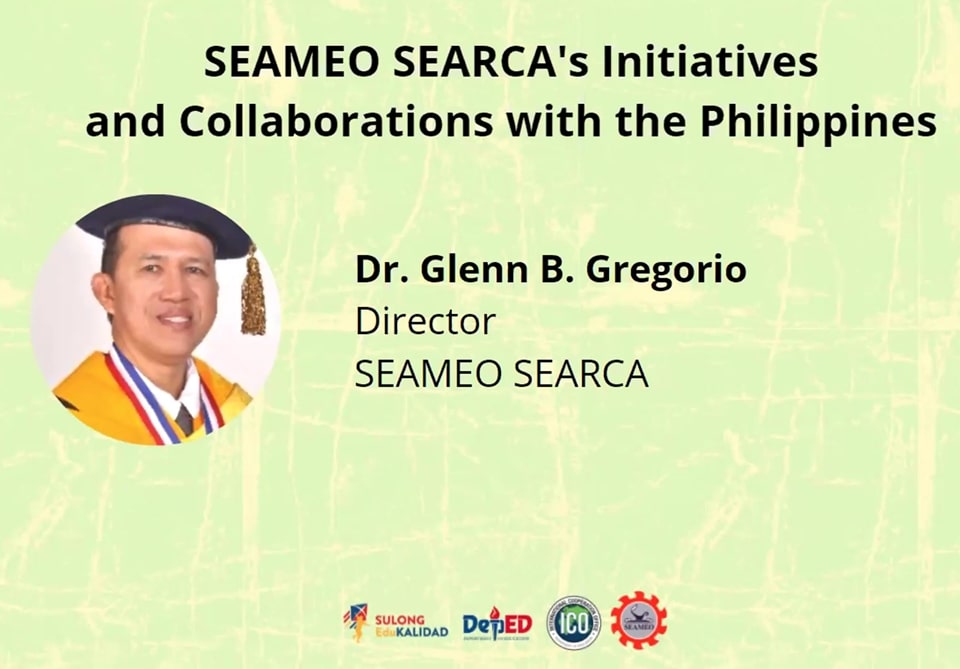 The Southeast Asian Regional Center for Graduate Study and Research in Agriculture (SEARCA) led by its Director, Dr. Glenn B. Gregorio, presented its 11th Five-Year Plan focused Accelerating Transformation Through Agriculture Innovation (ATTAIN) together with joint activities and ways to go forward in the SEAMEO Online Course organized by the Southeast Asian Ministers of Education Organization (SEAMEO) Secretariat (SEAMES) and the Philippine Department of Education-International Cooperation Office (DepEd-ICO) held on 10-12 May 2021 via Zoom.

Dr. Gregorio started his presentation by informing the DepEd participants that SEARCA is hosted by the Philippine Government on the campus of the University of the Philippines Los Baños (UPLB).

“In the past decades, the UPLB Chancellor, as appointed by the DepEd Secretary to SEAMEO, served as the Country Representative of the Philippines to the SEARCA Governing Board,” Dr. Gregorio said.

He added that SEARCA’s mandate, as suggested by its name, “aims to deliver programs and services in graduate study and research in agriculture to assist national government agencies such as the Commission for Higher Education (CHED), Technical Education and Skills Development Authority (TESDA), the Department of Agriculture (DA), as well as the local government units (LGUs), among others in the Philippines and in Southeast Asia.”

The DepEd Secretary represents the Philippines in the SEAMEO Council and DepEd serves as the focal agency of SEARCA. Over the years, SEARCA has consistently reported that the majority of its programs and activities have benefitted the Philippines.

In 2018-2020, SEARCA generated funds from external sources, topping up the Philippine Government contribution to SEARCA by 79 percent. This allowed Center to fund more programs and activities and expand its reach and target not only in the Philippines, but the whole of Southeast Asia.

The Director added that “from 2020 to 2025, SEARCA will strive to be a leading enabler and champion of excellence in agricultural and rural development in Southeast Asia to elevate the quality of life of agricultural families through sustainable livelihoods and access to modern networks and innovative markets.”

Since 1966, the Center has been known for granting graduate scholarships across the Southeast Asian region. As SEARCA’s key program over the past decades, it was able to grant a total of 1,835 Master’s and PhD scholarships to Southeast Asians, 23 of whom are new scholars. In addition, ECL has formalized its Institutional Development Assistance program intended to empower and equip strategically located agricultural universities with the necessary resources to address the demands of the changing economic development in the region.

It also conducted Non-Formal Online Course on Responding to Climate Risks in Agriculture and Natural Resource Management (RCRANRM) that serves as an umbrella/introductory e‐Learning service that provides an appreciation of the core concepts and knowledge-based methods and tools to effectively respond to the threats of climate change on agriculture and natural resource management.

SEARCA also offers training-workshops on scientific research and developing fundable project proposals that may be taken by Grades 11-12 teachers, especially those teaching in the STEM track. 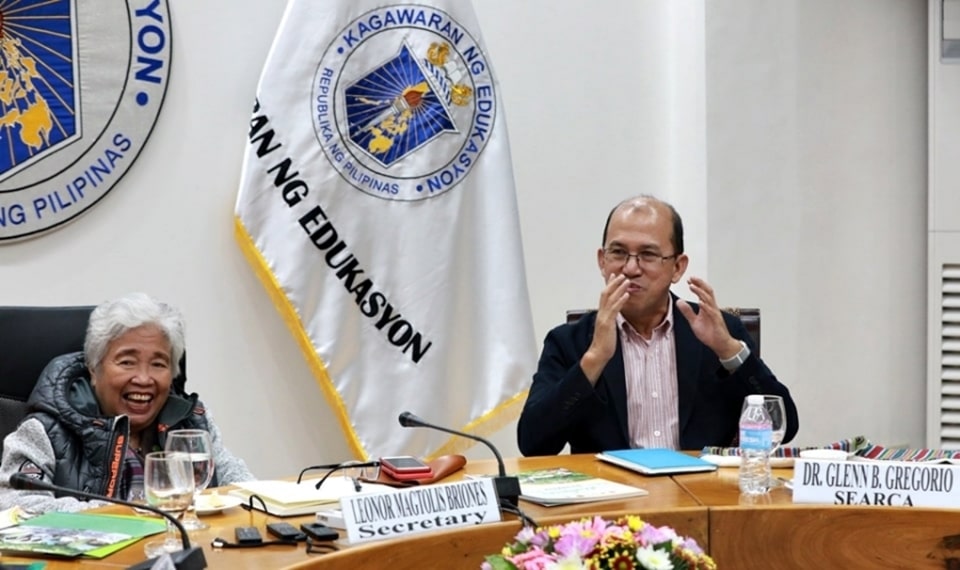 On the other hand, part of RTL, Dr. Gregorio emphasized SEARCA and DepEd was able to partner to achieve a common goal of preventing hunger and malnutrition among school children. DepEd has long been implementing food and nutrition programs for the children such as the Gulayan sa Paaralan Program (GPP) and School-based Feeding Programs (SBFP).

GPP is one of the flagship programs being implemented nationwide following the DepEd Memorandum No. 293, s. 2007. Since 2007, the GPP was established to support the government’s initiative to prevent hunger and malnutrition among school children. DepEd, in coordination with the Anti-hunger Task Force, National Nutrition Council, and LGUs, implemented the “Food for School Program” and other feeding schemes for the most vulnerable and food-insecure sectors and provinces in the country.

The GPP initially aimed to raise the public’s consciousness on health, nutrition, and economic benefits of the school, home, and community gardens; establish school gardens as a source of food for the feeding programs; intensify fruits and vegetable production; showcase garden models in schools for replication in the home/community; and inculcate the values of health, nutrition, industry, love of labor and caring for others among the school children.

The Director emphasized that “SEARCA, on the other hand, implemented in 2016 the project “A Participatory Action Research on School and Community-based Food and Nutrition Program for Literacy, Poverty Reduction and Sustainable Development,” commonly known as the School-plus-Home Gardens Project (S+HGP).”

Dr. Gregorio also shared the “plus” factors identified by the project management team and stakeholders. There are the following: (1) promotion of year-round food production in both schools and home; (2) mobilization of parents in the school gardening activities; (3) allocation of funds by the LGUs; (4) multifunctionality of the school gardens as a source of food, nutrition, additional income, and learning gardens; and (5) stimulation of the children’s interest in agriculture.

SEARCA’s commitment to the youth sector was also discussed by Dr. Gregorio. “The Young Forces for Agricultural Innovation (#Y4AGRI) is SEARCA’s youth platform to engage the youth both internal staff and our young stakeholders. We aimed to nurture our relationship as part of the once young with our young ones,” he articulated. The #Y4AGRI platform was launched last August 2020 in celebration of the International Youth Day including series of young agrinnovators serving as resource persons for the SEARCA Online Learning and Virtual Engagement (SOLVE) webinar series. This was followed by a regional video contest to showcase youth in agriculture actions on the ground.

In addition to a wide range of youth activities, the Center partnered with the University of the Philippines Rural High School (UPRHS) in organizing a “Youth in Agriculture Online Engagement Series” under Seed Fund for Research and Training Grant. This 18-week program aims to engage students in agriculture and encourage the youth to pursue careers in agriculture and its related fields to help increase the workforce that can lead the country to food self-sufficiency.

He added that just last week, “SEARCA led a discussion on the principles and applications of biotechnology in crops that had more than 340 student and teacher participants not only from the Philippines, but also from Thailand, Malaysia, Myanmar, and the United States. DNA Extraction using household materials. The participants were engaged in a lively discussion and even sent photos of their own DNA extraction setups in their homes.”

Moreover, SEARCA also partnered with the Mindoro Biodiversity Conservation Foundation, Inc. (MBCFI) on the mass co-publication of Mindoro Treasures to empower K-12 teachers and students.  The Center is also exploring how to make these types of references more online and interactive, which in the long term will be more cost-effective, scalable, and pandemic-proof.

As CHED Technical Panel Chair for Agriculture, Dr. Gregorio goes at forefront of curriculum review and development of agricultural courses and curricula across the Philippines. He shared that he is also a member of the Center for Integrated STEM education in the Philippines (CISTEM) Board of Trustees.

Despite the limitations of the new normal, the Director mentioned that it did not stop SEARCA from preparing its physical activations once the situation gets better. He introduced the AgriMuseum, as an alternative mode of promoting awareness and appreciation of the status of agriculture in the region. It is visualized to be incorporated into the Center’s core programs, educating and empowering stakeholders for them to appreciate more deeply the role of agriculture in their own lives and in national development; and favor venturing into various agricultural and rural development (ARD) professions, becoming ARD’s staunch supporters and doers.

Under the newest department which is EIG, the AgriMuseum aims to: (1) advance the science and practice of ARD in Southeast Asia (SEA); (2) Promote awareness on and appreciation of the state of ARD in the region; and (3) Stimulate discussion, learning, innovation and collaboration for inclusive and sustainable ARD in SEA.

On top of the museum, the SEARCA iCREATE Innovation Café, a Lego-based platform to promote design thinking, creativity, forward-thinking, immersive and hands-on experience for youth and children to experience the wonders of innovations in agriculture will also be put into place as part of its 11th Five Year-Plan.

The Center Director concluded his presentation by marking SEARCA’s legacy to SEAMEO and to DepEd. He said, “SEARCA strives to operationalize our international commitment within the framework of SEAMEO, particularly the SEAMEO 2030 Agenda, and connected with the ASEAN Communities.”