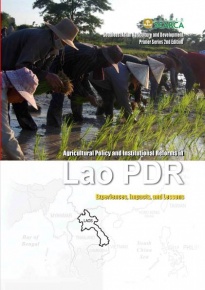 Lao People’s Democratic Republic (PDR) is a small agricultural and mountainous country, which borders relatively larger rice-exporting countries like Myanmar, Cambodia, China, Thailand, and Vietnam. The country has been transitioning from a land-locked to a land-linked country, with about 6.3 million people living in its 18 provinces, mostly in rural areas (about 67%). Urbanization, however, is occurring at a rate of 4.9 percent annually. The country is known for its rich biodiversity, and its most fertile land is found along the Mekong plains. The Mekong river flows from north to south, forming the border with Thailand for more than 60 percent of its length.

Despite its status as a least developed country, (LDC), Lao PDR has made significant progress in poverty alleviation, with poverty rates declining from 46 percent in 1992 to 23.4 in 2012. According to the 2010 UNDP Human Development Report, the country is one of the 10 “top movers” in the world in terms of progress on human development in the last two decades. As of 2018, Lao PDR ranks 139th out of 189 countries in terms of human development.

In the 2012 World Economic Outlook, Lao PDR is cited as one of the 20 fastest growing economies in the world. This is evidenced by high economic growth rates, low inflation rates, reduced proportion of Lao people living in poverty, increased growth in the agriculture and forestry sector, rapid growth in the non-agriculture sectors (i.e., manufacturing industry, tourism, energy and mining, expansion of services), governance reforms, and pro-poor development programs. Moreover, the country displayed continuous progress in the areas of poverty reduction, child and infant mortality, HIV prevalence, malaria and tuberculosis, and key education indicators.

The country’s main development challenge now is ensuring equitable distribution of benefits from its high economic growth and translating this into inclusive and sustainable human development. Lao PDR intends to graduate from its LDC status by 2020. As of 2018, the country’s GDP was mainly being driven by its power, construction, and manufacturing sectors. The country has likewise opened up in recent years, joining the Association of Southeast Asian Nations (ASEAN) in 1997, and the World Trade Organization (WTO) in 2013, respectively.

Lao PDR remains to be a predominantly agricultural country; however, recent economic growth was seen to be driven by other sectors such as mining, logging, hydropower, and services. Moreover, the country is known to be rich in land and natural resources, which in recent years have been attracting significant investments, both domestic and foreign. This, in turn, raised the need to ensure that the development of the country will also be managed in an environmentally sustainable way.