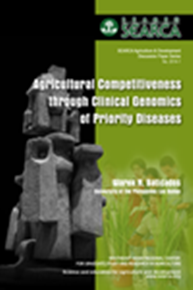 The search for food security remains an overriding concern for many people and nations. Globalization has helped usher a livestock revolution resulting in a large increase in global trade in livestock products and greater possibility but also higher risk of introduction and transmission of animal disease pathogens. To respond to the present challenges, a stronger productivity growth brought about by investing in research and development was discussed. The paper presented original data on initial clinical genomics research of several priority diseases in the Philippines with emphasis on the use of genomic technologies. Computational analysis of the genome of the molecularly detected parasites utilizing available data from published parasite genome projects was conducted. Potential drug targets or “keys” which are hoped to unlock the “Pandora’s box” of effective control of disease-causing agents were also reviewed. It also attempted to examine the data of their animal disease counterparts in other countries in Southeast Asia. Overall, the paper expounded the field data on the application of genomic technologies for accurate detection of animal diseases and other diseases of national precedence and connotation in the Philippines. It presented a more reliable and scientific way of performing disease surveillance and diagnosis through modern molecular techniques. It focused on how genomic technologies revolutionize livestock health and production, thus leading to augmented agricultural productivity and competitiveness. Furthermore, it tackled the primary role of clinical genomics in addressing the issue of globalization, with special emphasis on livestock revolution as well as its major impact to the livestock sector after its integration, particularly in increasing agricultural competitiveness of the country. It also discussed the
possible role and contributory importance of genomics of animal diseases in the Philippine Genome Center and the beneficial contribution of clinical genomics in planning and executing disease control and treatment programs for diseases of medical and/or veterinary concerns in the country.