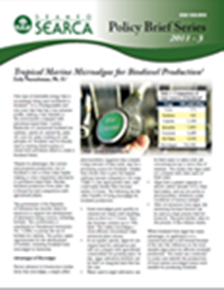 One type of renewable energy that is increasingly being used worldwide is biodiesel. It is a biodegradable and non-toxic fuel that has a low emission pro! le, making it less harmful to the environment compared with petroleum-based fuels. Current feedstocks of commercial biodiesel are soybean, canola oil, animal fat, palm oil, corn oil, waste cooking oil, and jatropha oil. Biodiesel may be directly used in existing diesel engines or mixed with petroleum diesel to create a biodiesel blend.

Despite its advantages, the current and projected production cost of biodiesel is two to three times higher, making it a less competitive alternative to petroleum-based fuels. Besides, biodiesel production from plant oils is limited by land competition with agricultural plants.