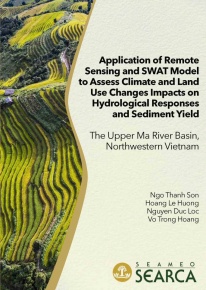 The Upper Ma River basin located in Son La and Dien Bien provinces in the northwestern region of Vietnam has a total area of 6,688 km2. It is a typical river basin in Vietnam, a transboundary with variable flow regime and topography, and has high population pressure in its mountainous region. It is also considered as one of the most disaster-prone regions, suffering from typhoons, tropical storms, drought, landslides, soil erosion, and forest fires. In the study area, land use and climate change are two main factors that directly affect regional hydrologic conditions; thus, the segregation of their influences is of great importance to land use planning and water resources management.

The study assessed the impacts of land use change and climate change on hydrological process and sediment yield in the Upper Ma River basin in Vietnam through remote sensing (RS) and the soil and water assessment tool (SWAT) model. Maps with land use were generated using RS for the years 1994 and 2015. The SWAT model was used for hydrological process and sediment yield simulation. Results indicated that the SWAT model proved to be a powerful tool in simulating the impacts of land use and climate change on catchment hydrology and sediment yield based on the Nash-Sutcliffe efficiency (NSE), coefficient of determination (R2 ), and percent bias (PBIAS) values. For runoff, the values of NSE, R2 , and PBIAS were 0.84, 0.85, and 2.61 during calibration period, respectively; and 0.75, 0.81, and –8.30 during validation period. For sediment yield, the values obtained during calibration period were 0.73, 0.76, and –3.61, respectively; during validation period, they were 0.87, 0.88, and –1.46. The change in land use from forest to cash crop and urban combined with climate variability between 1994 and 2015 strongly contributed to increasing hydrological processes (i.e., surface runoff, evapotranspiration, and water yield) and sediment yield, with decreasing percolation and groundwater. Data on climate change for the period 1994–2015 showed significant increase in all hydrological components, but with decrease in sediment load. It can be explained by the decrease in precipitation in the wet season, increase in precipitation in the dry season, and earlier transition of normal rainy season in northwestern Vietnam. Under impacts of projected land use and climate change scenarios on hydrological process and sediment yield of the Upper Ma River basin, results indicated that ET, surface flow, and sediment yield are more sensitive to the changes in land use and climate by 4 percent, –1 percent, and 6 percent, respectively, in the future. Moreover, in comparison with current conditions, the potential soil erosion in the Upper Ma River basin ranges from moderate to high. In general, a deep understanding obtained from hydrological responses and sedimentation, and experience in using RS and SWAT will provide the guidance and techniques that may be applicable to other river basins in Vietnam. In addition, using SWAT could be of value for decision makers in integrated river basin management in developing adaptation and mitigation strategies in relation to changes in climate and land use.