Microbes for Sustainable Agriculture: Isolation and Identification of Beneficial Soil- and Plant-Associated Microorganisms 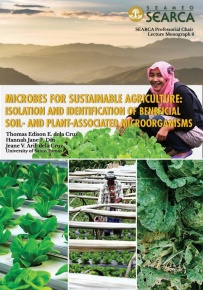 In soil, fungi are effective in controlling pathogens while bacteria can promote the growth of plants through secretion of growth-promoting hormones. In this study, beneficial fungi and bacteria were isolated from bulk and rhizosphere soil samples, and from leaves, stems, and roots of romaine lettuce either as epiphytes or endophytes. The isolated microorganisms were tested for their ability to solubilize phosphate. Given the low amount of phosphorus in soil, the ability to acquire this mineral from the soil and share it with its host plants is an important trait that can enhance plant growth. From this study, one bacterium and seven fungal strains were capable of doing this task as evident by the clearing zones around colonies in Pikovskayas Agar. Isolated soil- and plant-associated fungi were also tested for their ability to inhibit the growth of a plant pathogenic fungus. Our dual-culture set-ups showed 30 of the 53 fungal strains exhibiting antagonistic activities. Of these, nine fungi positively inhibited the growth of Fusarium oxysporum. Identities of the beneficial microorganisms were confirmed through gene sequence analysis. This study showed the potential of soil- and plant-associated microorganisms as plant growth enhancers, which can be incorporated in soil amendments.