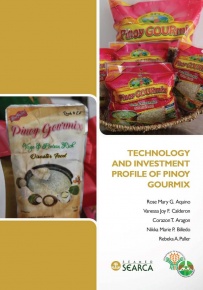 As reported by the Philippine Statistics Authority (2019), Region 2 (Cagayan Valley Region) ranks 1st in corn production (inclusive of OPV white corn as staple food) and second in the production of rice in the country. Recently, the Region is also gradually being recognized for its strong adlay (Coix lacryma jobi, L) promotion and production program. In this program, adlay is promoted as an alternative food staple using marginal areas for corn (Aquino et al. 2016). These manifest the local availability and sustainable supply of raw materials for product development, making the said cereal crops production more enterprising and income-enhancing.

Considering the fact that Isabela, one of the provinces in the region, was proclaimed the mungbean capital of the Philippines by the Department of Agriculture through the Administrative Order No. 23 Series of 2011, and other provinces in the region are also dubbed as a major producers of other important legumes like soybean, coupled with its continuous production of indigenous herbal vegetables and spices (particularly yellow ginger in the provinces of Batanes, Nueva Vizcaya and Quirino), the utilization of the fresh produce/harvest of these crops for food processing of secondary products can help increase the farmers’ income.