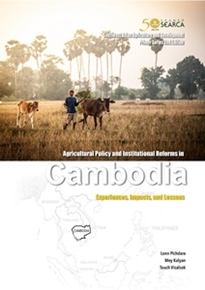 Cambodia has a total land area of 181,035 square kilometers, 20 percent of which is used for agriculture. As of 2014, its total population is at 15 million, the majority of whom (80%) lives in rural areas and largely depends on agriculture and other related activities. As such, the agricultural sector is crucial for promoting growth in local production and job creation and for contributing towards poverty reduction, economic growth, and socio-economic development of the country.

The aim of this primer is to discuss agricultural policy and institutional reforms in Cambodia with a focus on experiences, impacts, and lessons. It is composed of six chapters: Macroeconomic Environment; Agriculture and Rural Sectors; Major Problems and Challenges in the Agricultural Sector; Policy Reforms and Implementation Mechanisms; Performance, Impacts, and Lessons; and Conclusion.

It is clear from the literature review that Cambodia’s economy has performed consistently well over the last decade, with an average annual gross domestic product (GDP) growth rate of 7.7 percent. The economy structure has been altered by such a rapid growth. From 1995 to 2012, agriculture’s share of GDP declined from 44.4 percent to 28 percent, while the industry and service sectors’ share increased from 13.5 percent and 35.3 percent to 31 percent and 41 percent, respectively. This growth has been driven mainly by a fast expansion in garment, textile, apparel, and footwear exports. The GDP per capita increased from USD 240 in 1993 to nearly USD 1,000 in 2012. GDP and GNI (gross national income) have increased from USD 3.5 billion and USD 3.6 billion in 2000 to USD 14 billion and USD 13 billion in 2012, respectively. Average annual inflation was kept below 5 percent in 2013. With this growth, Cambodia is expected to have graduated from least developed country (LDC) status to becoming a lower-middle income country in 2018.

Interestingly, the decline in the share of agriculture to the GDP in 2004 – 2013 did not reflect any decrease in agricultural production. In fact, the gross value added (GVA) has increased by 40 percent from KHR 5,596 billion in 2004 to KHR 9,087 billion in 2013 (constant 2000 prices). In general, the agricultural sector increased on the average by 3 – 4 percent annually (2008 – 2013), depending heavily on rainfall and other natural factors.

Cambodia’s agriculture sector is composed of four main categories: crop, fisheries, forestry, and livestock. Crops represent more than half of the total contribution to the agriculture sector. Fisheries, on the other hand, contributes 26 percent, livestock production contributes 14 percent, and forest trade contributes about 5.5 percent. Rice, occupying more than 80 percent of cultivated land, is the dominant crop. It is not only the staple diet for the average Cambodian, but also the country’s most important agricultural export commodity; thus, it is considered as the major driver of agricultural growth, poverty alleviation, and national and household food security.

(RGC) specifies agriculture as one of its priorities in its rectangular strategy for growth, employment, equity, and efficiency (Phases I-III). The four “sides” or areas of this rectangle are: (1) improving agricultural productivity and diversification, with a special focus on rice and rubber; (2) land reform and de-mining; (3) fisheries reform; and (4) forestry reform. Policies on these key subsectors have been formulated, implemented, and continuously reformed by the RGC to promote sustainable agricultural growth. As a consequence, Cambodia has achieved a remarkable increase in agricultural production and exportable surplus in a number of commodities, including paddy, cashew nut, rubber, cassava, sesame, and maize over the past 10 years. Rice production, in particular, has shifted from shortfall to exportable surplus. The total paddy harvest in 2012–2013 reached 9.31 million tons (equivalent to 5.22 million tons of milled rice), leaving a potential exportable surplus of about 3 million tons. Such a rapid growth has turned Cambodia from a net rice importer to an exporter. A total of 378,000 tons of milled rice was exported to 66 countries in 2012–2013.

However, it should be noted that the growth of the agriculture sector has been based on the expansion of production factors, namely, land and inputs (seeds, fertilizer, chemicals, irrigation) and other drivers including liberal policy environments, trade integration with the global economy (ASEAN, Greater Mekong Subregion, and EU communities), higher food prices, higher labor costs, improved connectivity to markets, technology, finance, and private sector investment. Yet, the total factor productivity, which is the engine of sustainable growth, remains constant. Moreover, little has been done on value addition to the commodities—a factor leading to poor integration with the agribusiness sector. Therefore, it is suggested that future agricultural development and transformation in Cambodia focus on an integration of the past and new drivers of growth. Potential new drivers of growth include total factor productivity growth, competitiveness, and development of productive partnerships between farmers and agribusiness enterprises. These drivers will result in the growth of inputs, maintaining Cambodia’s edge in the global market beyond being the producer with the cheapest price, developing value added products, and providing more stability in output and input prices.