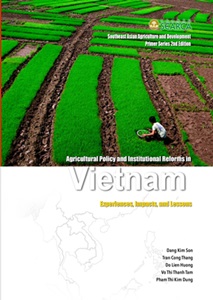 This book is the second edition of the Southeast Asian Agriculture and Development Primer (SAADP) Series for Vietnam, published by the Southeast Asian Regional Center for Graduate Study and Research in Agriculture (SEARCA). The first edition was published in 2009. This second edition targets at reviewing major agricultural policies and institutional reforms in Vietnam and bring in some experiences and lessons learned for the future agricultural development in Vietnam. This book has six chapters which can be summarized as follows.

Chapter I and Chapter II present an overview of Vietnam's national economy, particularly the agriculture and rural areas. Generally speaking, Vietnam has gained remarkable achievements in economic growth and in foreign trade, especially in agricultural trade, due to its active participation in the world economy and breakthroughs in economic policy reform. The country has also been successful in poverty reduction and improvement in income inequality. However, the country faces some challenges, which include intensive use of natural resources and low value added of commodities produced in Vietnam.

Chapter III analyzes the major problems and challenges in the agriculture sector to bring a better understanding of the context under which agriculture policies and institutional reforms have been done. Problems and challenges can be found at all stages of the agricultural production, from inputs to production to market access. Lack of land, land degradation, shortage of water, low-quality labor, and lack of credit for farmers are highlighted issues.

Having examined the economic background as well as difficulties of the agriculture sector, Chapter IV provides an analysis of reforming process and implementation mechanism of some key policies on land, credit, agro-insurance, and rice. The land reform policy has helped to eliminate the key obstacle to agricultural development—the lack of land. However, there are still shortcomings in the implementation of land policies and rural land markets that have posed various difficulties in agricultural production. Credit policies have still yet to play their intended role as leverage for agricultural and rural development. Although the funds for implementing the policies have been sufficient, such policies failed to establish large-scale and sustainable agricultural production in Vietnam. Regarding agro-insurance, the current implementation of the pilot policies proves its necessity and is a noteworthy effort in advancing the development of agro-insurance in the country, especially if the lessons learned from the pilot implementation are going to be addressed. The rice policy system is the most comprehensive and organized among Vietnam's policy systems. However, despite its contributions to the development of the country's rice production and in enhancing rice exports, these policies have numerous critical limitations, notably the lack of representation from paddy farmers in the rice trade market. This leads farmers to reap smaller benefits than what is targeted.

Before giving recommendations in the final chapter, Chapter V discusses major challenges and opportunities for agricultural development in the future. One of the biggest challenges in the sustainable development of the agriculture sector is how to mitigate the adverse shocks that directly or indirectly (via macroeconomic factors) affect agriculture and rural development. The depletion of natural resources (e.g., land, energy and water resources, and natural fisheries) together with rapid rate of industrialization and urbanization, the developments in science and technology have brought environmental pollution and ecological imbalance, which consequently pose many challenges in the sustainable growth of agricultural production. Extreme climate events are expected to occur more frequently and become more intense due to climate change. In the case of Vietnam, the large-scale effects of climate change would be worse for agricultural production and in the rural areas. However, global demand for agricultural crops will increase considering the global population growth, increase in per capita income of populous countries like China and India, and the higher demand for biofuel and feeds. In the future, market integration will become more comprehensive. Such integration would expand the market, attract investments, improve technology, and increase international and domestic competitiveness despite the persistence of unfair international trade that puts developing countries at a disadvantage.

Conclusions and recommendations in Chapter VI state that over the last three decades, Vietnam has become a low middle-income country and a world-leading exporter of several agricultural commodities. Agriculture has helped Vietnam achieve some millennium development goals (MDG) ahead of the MDG schedule. It is the driving force and the mitigating factor that has helped the country overcome several regional and global crises. The country's achievements in agricultural development have been attributed to the reform policies instituted by the government. Accordingly, a completely new policy system is the precondition and driving force behind the ability of the sector to adapt to challenges and to take opportunities in the future. Policy reform needs to be conducted together with institutional reform, and agricultural restructuring needs to be implemented together with economic restructuring. If this can be achieved, then agricultural development will greatly contribute to economic rebound, thereby marking another milestone development in Vietnam.