Estimating the Demand Elasticities of Rice in the Philippines 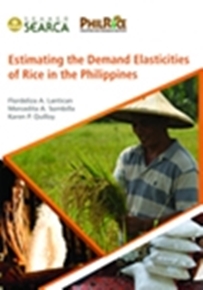 Rice remains the basic staple food in the Philippines. For most Filipinos, no meal is complete without rice. It is their main source of carbohydrates and energy and provides a physiological sensation of satiety. It accounts for 20 percent of their daily household budget.

Demand for rice has strengthened over time in the country. While the demand theory states that as income rises, food intake becomes more diversified usually away from the basic staple, e.g., rice and corn in the case of the Philippines, in favor of bread, pasta, or noodles, meat, fish, fruits, and vegetables, the opposite is happening in the Philippines. Demand for rice has increased, despite improvement in per capita incomes, albeit at a slow rate. Annual per capita consumption of rice hovered around 90−92 kilograms (kg) in the 1980s and 1990s. It then gradually rose to an average level of 113 kg per capita per annum at the turn of the century, peaking at 128 kg per capita in 2008 and declining to 119 kg per capita in 2009−2010 (Bureau of Agricultural Statistics [BAS] 2011).

There are concerns, however, on the accuracy of the per capita demand estimates. BAS estimates the total rice demand for food, which accounts for the bulk of domestic requirements, using the disappearance method. It is equated to the total available supply which is total rice supply (i.e., sum of beginning stock, domestic production, and imports minus exports) less all those that go for feeds, seeds, wastes, and  processed non-food use. These issues cast doubts on the estimates of per capita rice demand, which is merely the available rice supply for food use divided by population.

In response to the concern on the reliability of rice demand estimates as reported by BAS, the Department of Agriculture (DA) provided funds to conduct the Survey of Food Demand for Agricultural Commodities (SFD) on the consumption of rice and other agricultural commodities in the period 2008−2009. SFD is a nationwide survey which aims to determine the current and emerging consumption patterns of Filipinos with regard to basic food items coming from 11 commodity groups.1 The 2008−2009 SFD was conducted in four quarterly rounds from August 2008 to May 2009, with a total of 13,880 households for each survey round.

Using the SFD data, this study estimated the demand elasticities of rice in the Philippines, which would be used in calculating more accurately the rice demand level based primarily on changes in prices and incomes. Specifically, the study aimed to fit an appropriate demand equation to calculate income and price elasticity parameters for rice across income groups and between rural and urban consumers, and identify factors other than prices and income that influence rice demand changes. Using these elasticity parameters, it also sought to validate the level of per capita rice demand and determine the extent of commodity substitution with respect to changes of incomes and relative prices of commodities and assess the vulnerability or resiliency of the low income and rural groups to price and income shocks. Lastly, this study provided policy recommendations to safeguard food security of the more vulnerable segments of the society in case of the occurrence of another food crisis.

A total of 9,122 household-respondents out of the whole SFD sample were considered in the study. These include only those who were able to participate in all the four survey rounds. Such sampling was made to maintain consistency of the characteristics and location of the respondents across the four survey rounds and allow proper estimation of their annual rice consumption. Moreover, only 15 commodities were analyzed. These include mostly the food items which are common to the Filipino diet and belong to top food groups that were eaten at home, according to the Family Income and Expenditure Survey2 of the National Statistics Office (FIES-NSO). Other commodities were excluded due to very few survey responses. Descriptive statistics and complete demand system models were employed in the demand analysis of the SFD data.