Growth of Aquaculture Productivity in the Philippines 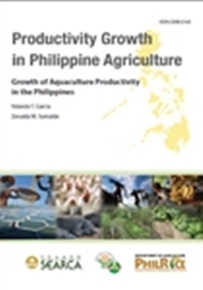 The growth of the aquaculture sector has become an important source of expansion in the Philippine fishery sector. This study attempted to measure the growth in total factor productivity (TFP) of the top four farmed species in the country using the Törnqvist TFP decomposition approach. Species-specific TFP indices and their contributions to production growth were estimated for the milkfish, tilapia, tiger prawn, and seaweed industries. A comprehensive analysis of the performance of the aquaculture industry from 1997 to 2008 was also presented.

Results of the study showed that annual TFP estimates ranged from 2.5% to 6.6%, with higher productivity indices coming from milkfish and tilapia cultures, whereas TFP levels were found to be lower for seaweeds and tiger prawn cultures. Similarly, the factors that helped in expanding the country's aquaculture industry such as R&D, access to credit, and infrastructure development were also investigated through an aggregate production function by species in order to determine the roles they played in the growth of the country's aquaculture sector.