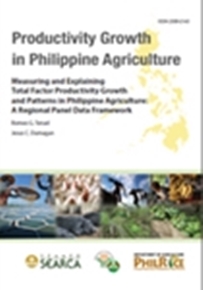 The most recent agricultural data set covering 12 administrative regions and years 1974–2004 was used to determine the TFP level and growth. Results showed that output growth in Philippine agriculture was mainly driven by productivity, and minimally by the inputs of production. Productivity gaps were observed among the different regions. Central Luzon was the most productive region, whereas Bicol was the least productive. TFP growth was at its peak in the late 1970s, followed by a deceleration in the 1980s, and resurgence in the 1990s until the early part of the recent decade. The highest TFP growth rate recorded has not been paralleled despite government efforts and initiatives to revive the less dynamic agricultural sector of the Philippines. Across time, revenue growth was also seen to be declining, which may be due to the decrease in growth contribution of output prices (which remained relatively large), and to the decrease in growth contribution of input quantities (which was relatively small). Lastly, output prices contributed substantially to agricultural revenues, and TFP growth accounted mostly for growth in quantities of agricultural outputs. The TFP growth substantiated the importance of infrastructure, rural electrification, and investments in research and development to enhance agricultural productivity.

Overall, this study recommends further examination of the role of agricultural output prices in determining farm incomes, and for initiatives to be undertaken to boost agricultural productivity through investments in infrastructure and research and development.