Agricultural Productivity Growth and Environmental Externalities in the Philippines 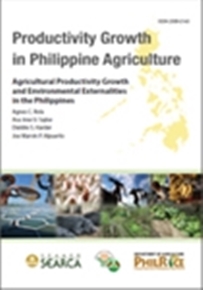 This study aimed to understand and quantify the on-site and off-site effects of agricultural externalities, their causes, and the mitigating mechanisms that work and do not work based on literature review and empirical case study on upland corn production. To analyze the on-site effects, a 10-year panel data in Bukidnon, Philippines was used to quantify the indirect relationship between soil conservation technology adoption and upland corn productivity. A two-stage econometric analysis was done. First, the probability of adoption was estimated. The associated inverse Mill’s ratio obtained from the first stage was used to correct the second stage endogenous switching stochastic frontier model estimation of the determinants of corn yields. An end of the pipe analysis using secondary data was further done to explain the off-site effects of upland agriculture via the surface water resource as input to lowland production.

Results showed that upland corn productivity was affected by abatement of soil erosion. Evidence from the literature revealed that agriculture-to-agriculture externality (upland soil erosion-reservoir sedimentation-loss in irrigable area) exists, although this may not be as large because other upland activities, such as mining, also cause soil erosion. The study results imply that R&D investments for soil conservation have equity effects and exploring agriculture-to-agriculture externalities remains a research challenge to aid policy.