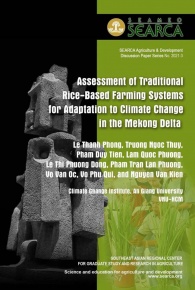 Climate change has brought enormous challenges to human lives, livelihoods, and the environment. Temperature increase, abnormal floods, and water pollution have negatively impacted on socioeconomic and agricultural systems in the Vietnamese Mekong delta. The aims of this study are to assess the readiness of traditional rice farming systems in the Vietnamese Mekong delta in adapting to climate change conditions and select traditional rice genetic materials for supporting breeding programs in the future. The research was conducted from April 2016 to December 2017 in the upper part of the Vietnamese Mekong delta, including An Giang, Kien Giang, and Long An provinces where the cultivation of traditional rice varieties or TRV thrive with the conditions brought by the climate change such as drought and salinity.

Social research methods were used to assess farmers’ socioeconomic status, indigenous farming knowledge, and the alternative farming models in the context of climate change. Sampling seeds were also analyzed based on morphological and yield-related indicators.

TRVs are distributed mainly in Kien Giang and Long An provinces and some mountainous areas of Tri Ton district in An Giang province. Yield varies from four to seven t/ha and these rice varieties are well adapted to unfavorable soil and adverse weather conditions such as drought, salinity, and alum toxicity. These rice varieties can tolerate submergence of <1.0 m while possessing outstanding features such as good resistance to common pests, albeit long growing duration, less fertilizer, demand, and pleasant taste. TRV is combined with aquaculture farming in Kien Giang, providing a reliable source of organic food essential for aquatic organisms. TRVs are also providing potential condition for farmers to develop vegetable crops, particularly in An Giang and Long An provinces. However, TRV farming areas have significantly decreased owing to the rapid development of irrigation schemes for intensively high-yielding rice varieties production. Therefore, indigenous seed stock in the research sites has been alarmingly decreasing, some traditional rice varieties even disappeared, calling for studies on the restoration and conservation of these varieties. The research further showed that there was a rich diversity in TRVs in terms of color, phenotypes, and quality—providing genetic resources for further research, especially for climate-resilient rice breeding programs. TRV is a potential replacement for the intensive third rice cropping during the flooding season inside the high dike systems. This alternative helps to reduce soil and water pollution, preserve freshwater during flooding seasons, and adapt to environmental changes in the Vietnamese Mekong delta.

The key findings of this research are going to be presented in various academic conferences and field meetings, to attract agricultural policymakers and other stakeholders for further research and development of TRV farming models.