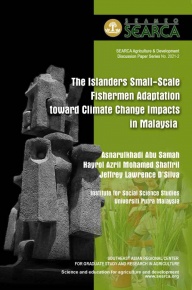 Issues related to demand on deeper understanding on climate change adaptation ability, inadequate number of social studies, and the lack of studies on specific groups have prompted this study to assess the adaptation toward climate change among islanders small-scale fishermen (ISFM) in Malaysia. At the same time, it also intends to identify and rank order the aspect of adaptation abilities among ISFM in different areas/zones and to match the recommendation for the periodical remedial measure based on a different aspect of adaptation abilities. A set of questionnaires was developed based on the individual adaptive capacity framework on social adaptation to climate change developed by the International Union for Conservation of Nature and Natural Resources. Based on multi-stage simple random sampling, a total of 500 ISFM in four Malaysian islands, namely: Pangkor, Langkawi, Perhentian, and Redang, were chosen as respondents. Each island was represented by 125 small-scale fishermen. The fishermen surveyed had a high level of adaptation with regard to eight aspects. The highest mean score was recorded by “attachment to place,” followed by “attachment to occupation,” and then by “formal and informal networks.” In contrast, the fishermen showed a moderate level of adaptation with regard to eight aspects, with “business size and approach” having the lowest mean score, followed by “financial status and access to credit,” and “employability.” These results depict a strong sense of belonging and attachment to their residential area and fishing routines, and it
demonstrate their strong social relationship with surrounding communities. Furthermore, results show that limited financial ability to survive, limited access to credit, and their inability to diversify their livelihood can obstruct them from responding effectively to the impacts of climate change. The study demonstrated the strengths and weaknesses of the ISFM’s adaptations to climate change. Based on their strengths and weaknesses, recommendations related to skill diversification, early warning systems, environmental conservation, strengthening internal and external social relationships, climate change training and awareness, and access to credit were suggested. These recommendations were formulated to guide them in generating well-planned and systematic adaptation options to deal with the threatening impacts of climate change.