Assessment of Impacts of Climate Change in Fisheries and Agriculture in the Coastal Area of Thua Thien Hue Province, Vietnam 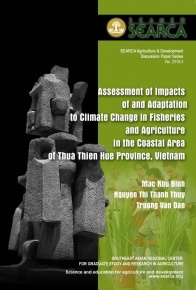 Climate change is a human concern, impacting not only the physical environment but also the livelihood of the people. Warnings on the probable severe negative effects of climate change on humans have been published globally and Vietnam is one of five countries that will be affected most severely by climate change and sea level rise. Therefore, climate change needs to be considered in the strategies and plans for long-term and shortterm development goals of each locality in Vietnam including Thua Thien Hue province.

As a coastal province, Thua Thien Hue has always suffered heavy losses from climate change. Through data collection and analysis, we found that over time, weather conditions and climate in Thua Thien Hue showed complicated movements, abnormal changes such as droughts, and prolonged heatwaves often occurring during the dry season from May to August every year. Meanwhile, cold weather lasted longer during rainy season (October to February). Floods and typhoons have occurred with stronger intensities, and tide amplitude has changed drastically. All these have had significant impacts on agriculture and fisheries activities in the province.