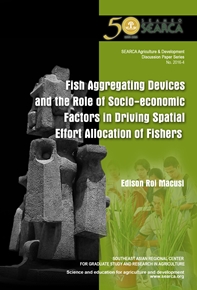 Although fish aggregating devices (FADs) efficiently gather fish, save time and fuel, and alleviate food insecurity, their widespread use has become contentious because of the destructive impact on juvenile oceanic tuna. The call to regulate the number of deployed FADs has been continuous to reduce the unintended catching of non-target juvenile species of tuna. Improving the practice of using FADs could also benefit from studying fishers' spatial behavior, FAD distribution, and decision making. This research thus examined how fishers use their FADs and how their characteristics and socio-economic factors influence their decision making and catch productivity. Semi-structured interview was administered to a total of 229 respondents in four study sites—Mati City, Lupon, Governor Generoso, and General Santos City, all in Southern Philippines. On the other hand, focus group discussions (FGDs) clarified information on catch data and on factors essential to understand where fishers fish and where they deploy their FADs. Potential catch data estimates from logbooks of fishers provided information on probability of catch on FADs and influence of monsoon. Results showed that fishers decided where to fish based on weather and sea conditions, socio-economic factors such as price of fuel and fish, information from other fishers and their other activities, and the imposition of sea regulations. On the other hand, decision on where to deploy FADs were influenced by the availability of the area, information on the pathway of fish and sea current, information from other fishers on good locations, and previous catches from a particular area. The study also revealed that while FAD deployment might be a long-term strategy to keep fishing grounds, the high probability that a potential catch exists on FADs (>70%) has increased the deployment of FADs in nearshore areas. Excessive deployment of FADs has resulted to overfishing. To conserve fish resources, a moratorium on the number of boats and FADs should be implemented. Issuance of licences for boats, gears, and FADs should also be controlled and limited.