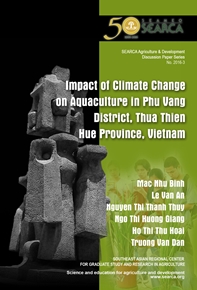 Climate change is a major global concern that greatly affects people, including their source of living. In 2010, the Asian Development Bank reported that Vietnam is one of the five countries most severely affected by climate change. About 70 percent of the country's total population lives along coastal areas and in islands. This study aimed to (1) evaluate the impacts of climate change on aquaculture in Phu Vang district (Thua Thien Hue province, Vietnam), and (2) develop a climate change adaptation model for aquaculture. Data on impact of climate change to aquaculture production were gathered through participatory rural appraisal tools, while spatial changes in water quality were determined through Geographic Information System (GIS). Experimental polyculture models were set up in the five study-site communes to determine the aquaculture practices that could be disseminated to small farmers. It was found out that Phu Vang had suffered heavy losses from climate change brought about by a combination of droughts and prolonged heat waves, and cold weather that lasted longer. Floods and typhoons have likewise occurred with stronger intensities, and tide amplitude has changed drastically. All these affected agricultural activities, especially aquaculture, which is considered as one of the most vulnerable sectors to climate change impacts. As a result, many households shifted from intensive to extensive culture, and some even left their ponds for other jobs. The limited understanding and capacity of people on climate change aggravated the situation, affecting their ability to respond and mitigate negative impacts. Water quality, specifically for aquaculture, was also affected as a result of rising temperature, prolonged droughts, rainfall, flooding, and salinization, which in turn reduced productivity and yield. Meanwhile, polyculture models of aquaculture implemented for this study brought high economic returns, and could be promising to replicate in various communes of Phu Vang district. The following are the primary recommendations to mitigate climate change impact in aquaculture and to facilitate sustainable livelihood for coastal people: capacitate communities and government in climate change adaptation and mitigation; expand promising aquaculture practices, area, infrastructure, and marketing of produce; and implement policies to mitigate damages of climate change to aquaculture and the community as a whole.