Assessing Impacts of Land Use and Climate Change on Soil and Water Resources in the Srepok Watershed, Central Highland of Vietnam 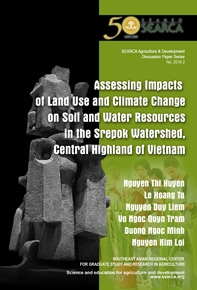 The Srepok River basin, which flows along four provinces in Vietnam and parts of Cambodia, is presently facing critical issues such as floods and droughts, pollution of waterways, deforestation of catchments, erosion and resultant sedimentation of reservoirs, overexploitation of groundwater, water-use conflicts, and transborder issues. This study aims to investigate changes in streamflow and sediment yield that result from land use changes, and climatic variation in the Srepok watershed. Plausible scenarios of land use change are simulated through Geographic Information System (GIS) using current conditions and information from the area as bases, and climate change scenarios built on outputs of General Circulation Models (GCMs) from the Southeast Asia System for Analysis, Research and Training (SEA-START 2009). These changes, individually or in combination, are input into the soil and water assessment tool (SWAT) to project future hydrological variables. Simulations have shown increase in annual average temperature at 0.75–2.5 degrees celsius and decrease in precipitation at 200–500 milimeters. These are both in medium- and high-emission scenarios for the period 2011–2039 and 2040–2069. Annual streamflow in medium- and high-emission scenarios appeared to be 3.7–5.6 times lower than the base scenario in 1990–2010. All scenarios are different in terms of amount and distribution of streamflow in the dry and rainy seasons. Shifts in rainy season, rainfall, and land cover have led to fluctuations in the amount of sediments. Total sediment yield in 1990–2010 is 9.1 times higher than in the medium-emission scenario, and 8.1 times higher in the high-emission scenario. For water components, the Srepok watershed showed over 60 percent streamflow and 36 percent evapotranspiration. Groundwater contributes over 60 percent to the total flow in the watershed than surface water. Therefore, groundwater also contributes to water availability in the Srepok watershed in the future. Results of this research can serve as baseline for plans for the Srepok watershed.