Enhancing the Productivity, Profitability and Quality of Root Crops and Vegetables through Macro and Micronutrient Fertilization 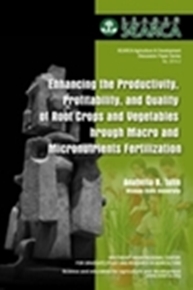 This paper presents various studies on the effects of macro- and micronutrient fertilization on the productivity (growth and yield), profitability, and quality of root crops such as purple yam (Dioscorea
alata) and sweetpotato (Ipomoea batatas),1 and vegetables such as tomato (Lycopersicon esculentum), pechay (Brassica napus), and cabbage (Brassica oleracea).

Most of the results presented here were taken from the findings of various research projects conducted by the author. Some of these projects were done in pot experiments (i.e., sweetpotato and pechay) and field experiments (i.e., purple yam, purple sweetpotato, cabbage, and tomato). The use of protected cultivation for tomato was also presented in comparison with the normal production in the open field. In all of the studies presented here, different combinations of macro- and micronutrients were used to determine the levels of nutrients that would enhance productivity, profitability, and quality. Results showed that for purple yam and purple sweetpotato, growth was greatly enhanced by the addition of macro- and micronutrient fertilizers. This is evident in the production of bigger leaves and longer vines. In terms of profitability, results showed that the application of higher levels of macro and micronutrient fertilizers significantly affected the yield of purple yam.

It is evident from the results of these studies that plant nutrition and proper fertilization play an important role in improving the yield of crops. These are necessary in attaining food security, especially in the Philippines, which faces the problem of land deterioration due to declining soil fertility. Establishing the right combinations of both macro- and micronutrients is therefore vital in more efficient and sustainable crop production.