Eating for a Lifetime: Filling the Policy Gaps in Philippine Fisheries 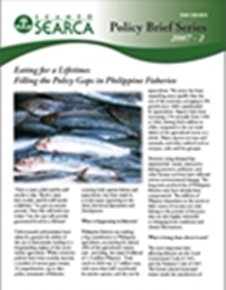 Philippine fisheries are making a big contribution to Philippine agriculture, accounting for almost 28% of the agricultural output, and providing the main livelihood of 1.5 million Filipinos. Total catch in 2004 was 3.7 million tons, woth more than half contributed by marine capture, and the rest by aquaculture. The sector has beenexpanding more rapidly than the rest of the economy, averaging 6.5% growth since 200, spearheaded by aquaculture. Exports have been increasing 17% annually from 1990 to 2003, hitting 4 million in 2004, compared to the net trade deficit of the agricultural sector as a whole. Major exports are tuna and seaweeds, and other seafood such as octupus, crab, and live grouper.