From Regulation to Promotion: A Policy Challenge for Philippine Biofuel Regulators 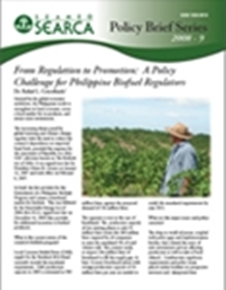 Stressed by the global economic meltdown, the Philippines needs to strengthen its local economy, create a local market for its products, and attract more investments.

The increasing threat posed by global warming and climate change, together with the need to reduce the country’s dependence on imported fossil fuels, provided the impetus for the enactment of Republic Act (RA) 9367 otherwise known as The Biofuels Act of 2006. It was signed into law by President Gloria M. Arroyo on January 12, 2007 and took effect on February 6, 2007.

In brief, the law provides for the formulation of a Philippine Biofuels Program and creates a mandated market for biofuels. This was followed by the Rnewable Energy Act of 2008 (RA 9513), signed into law on December 16, 2008 that provides for additional incentives to biofuel producers.