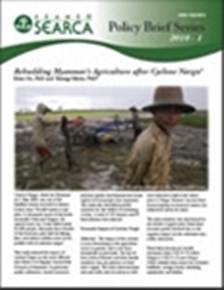 Cyclone Nargis, which hit Myanmar on 2 May 2008, was one of the deadliest storms recorded in history. It blew away 700,000 homes in the delta. It devastated much of the fertile Irrawaddy Delta and Yangon, the nation’s main city. It also killed nearly 85,000 people, destroyed three-fourths of the livestock, sank half the fishing fleet, and salted a million acres of rice paddies with its seawater surges.